Today's interviewee is romantic suspense author Sarah Andre. I first met Sarah over breakfast on the last morning of the 2014 RWA® National Conference in San Antonio. It proved to be a fortuitous meeting because Sarah was up for a Golden Heart® that night.

Since I'd only recently joined my local RWA® chapter, I had no idea what a Golden Heart® (or a Rita®, for that matter) even was. Sarah explained that the GH is RWA's® top award for unpublished fiction. I immediately began dreaming of someday being a finalist.

To see how that turned out, go here. So, thanks for that, Sarah!

Sarah's books, including her most recent, Capturing the Queen, are available on Amazon. 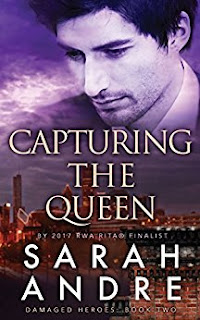 Question 1: Your books are very dark. What draws you to the darker side of human nature?

I'm fascinated you used the descriptor 'dark.' My earliest craft memories are sitting through a Donald Maass course at my Houston chapter meeting in 2006 and not knowing who he was or a lot of the craft lingo he was using, but knowing from the awed expressions on my chapter-mates' faces that he was "The Authority" on all things writing. So when he preached his trilogy of 'tension on every page' 'make things worse' and 'no backstory until way into your novel' I was profoundly shaped by that.

I'm also hyper aware that the modern-day attention span is critically short so I write with the drumming thought of: how can I get the reader to turn this page? What else should go wrong? And then I write it.

If you read my books in order you'll see the first is mostly a plot-driven approach to what can go wrong for my characters. Part of my growth was realizing (through critiques, edits and me devouring my favorite author, Kristan Higgins' books) that I lacked the ability to pull my readers' emotional strings. Subsequently each novel is still a race to survive and time-driven suspense, but it's more of a character study of what is going on inside my characters' heads as they face each obstacle. I'm fascinated by all that we humans hide inside, the effort it takes to keep our masks in place to the outer world, the misconceptions we have over events and other people's behaviors that then motivates us to react and often make things worse. So, where you say dark, I think of as real.

I am confident I'm on the right path with this emotional exploration because every time I release another book the feedback is: this is your best one yet.

Question 2: On Amazon, your publishers are listed as Entangled (for Locked, Loaded and Lying) and Beach Reads. Please contrast your experiences with these two publishers.


I waited 9 years for a publishing contract—I am the poster child for patience and perseverance! It was important for me to have a publishing company 'legitimize' my writing by offering me a contract which is why I waited so long instead of taking the self publishing route. The best part of publishing with Entangled in 2015 was I finally met my goal and I also worked with the editor of my dreams, Anya Kagan of Touchstone Editing. I've been with her for all my books because she freelances.

The hardest part of being under contract though, was the lack of control over basically everything. The publishing date, the cover, the price, when it goes on sale and for how long, what marketing is or is not being done... someone was calling the shots on every detail of my career.

Since I'd only signed a one-book contract, after LLL came out I figured I'd see what self-pub was all about. I took online classes, gathered resources and re-worked the 2014 Golden Heart® novel into Tall, Dark and Damaged. I'm thrilled to say it was a great experience all around, ending with me garnering the Rita® call this year!

One thing the online self-pub courses recommend is establishing your own 'company' name, maybe an LLC if it works for you. Ergo, I titled my self-pub endeavor Beach Reads—because that's what I consider my romantic suspense novels to be: the perfect poolside/beach read.

The difference between being under contract and self-pubbing is vast. I really love being the boss of everything. I also like getting paid more per book (wink!) Editing is still the same (Anya) and I hire 2 copy editors, a proofreader and several betas in my neurosis over not uploading the final novel with a careless plot, or grammar or spelling errors. It's a lot of upfront costs, but I doubt I'll be able to go the traditional route ever again. The freedom to call all the shots is everything to me.

Question 3: According to your website, you started your first book on a plane to Italy. Tell us about the trip--any praying or loving?

For my 40th BD my husband gave me a 'let's go anywhere-do anything' present. Faced with that it literally took me 2 years to decide, 'cuz you don't want to screw that up, LOL! Seriously, dear reader, where would you go on your trip-of-a-lifetime?!...Climb Kilimanjaro? Go on a spa retreat to Canyon Ranch? Binge-shop through Paris?

Well, the idea that sparked something in my heart was attending a week-long cooking class at a small Tuscan vineyard. This was June, 2004. I'd never been to Italy, and cannot truthfully say it was a country I'd yearned to see before deciding on that trip. But something about the write-up sounded so relaxing, adventurous and romantic! Kind of hit all needs, you know?

I swear there is something in the air there that ignites creativity and passion. I was literally on the flight over when, without a conscious thought of doing so, I opened a notebook and began writing the first page of the first story after years and years of ignoring my calling. The words poured out day and night. I wrote 50 pages by the time those 2 weeks were through. Long hand, stream of conscious sentences, the content very obviously a pantser romance. (Much to my shock. I'd stopped reading romance as a teen at camp.)

During the Tuscan cooking class (comprised of 11 Americans- 5 couples and a single woman) I became fast friends with the single woman, Jeannie. She was hilarious, larger than life and embraced adventures. After the trip was over we called each other almost daily and our biggest bond was missing that villa and that lifestyle. Missing the free personalities we'd been over there—fearless, joyful, creative. She was in awe that I could write, I was in awe that she had fantastical plotting skills. During one phone call we both came up with the idea to take a leave of absence from our jobs, go back to that villa and write an entire novel. And a few weeks later we did. (God bless my husband, who didn't blink at an eye at my abrupt and very obvious midlife crisis!)

Jeannie and I stayed in Tuscany for 6 weeks.  Oh, the hilarious escapades! She ended up having an affair with the hottie vineyard owner, I ended up writing the novel, which was dreadful craft, a training novel—there's no other way to describe it.

Each week a new set of Americans arrived to take the villa's cooking class and were told by the Italian staff that 2 American women were writing a novel about their adventures in Italy. (Each week our fame grew.) We would attend the villa's weekly cocktail reception as 'the famous authors.' We told everyone about our plot: a single woman with a broken heart coming to Italy and finding herself again through her Italian adventures with the men, the food, the countryside. The reaction was ecstatic interest from everyone who heard it.

No joke—Eat, Pray, Love came out the next year! I will always wonder if the author was one of those cooking class participants listening to us blather on about the plot. :)

Long story short, we do not regret one second of those 6 weeks, but Jeannie ended up with a broken heart and I ended up missing my hubby and pups to distraction. I came home with a completed novel and a passion to write that I could no longer deny. I gave her that story as a keepsake of our time there and went back to the one I'd started on the plane ride earlier that summer. It's also a training novel—under my bed and will stay there—but it's still my husband's favorite, isn't that funny? 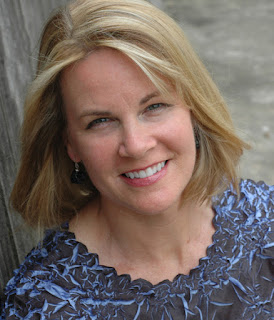 Sarah Andre is a 2017 RITA® finalist, which is Romance Writers of America highest award of distinction. She lives in serene Southwest FL with her husband and two naughty Pomeranians. When she’s not writing romantic suspense novels, Sarah is either reading novels, exercising to rude alternative rock music or coloring. Yes, you heard right. She’s all over those coloring books for adults.
Posted by Jeanne Estridge at 11:33 AM