Fiction Friday: The Least You Need to Know 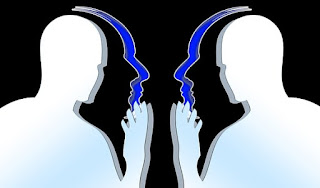 I've been reworking, for approximately the hundredth time, the opening scene to The Demon's in the Details, the second book in my Touched by a Demon trilogy. (Look for it on Amazon in October.)

Now that I've figured out what the book's about, I'm rewriting my first scene, yet again, to open that story.

And I'm once again struggling with this question: How much backstory belongs n that first scene?

Do we need to know that Rachel Blackmon, the mother of my protagonist, Keeffe, is dead?

Do we need to know that Keeffe was just fourteen when Rachel died? Or that Rachel died as a result of a malfunction of a da Vinci robot that nicked her iliac artery, causing her to bleed out before the hospital staff noticed? Or that this incident has left Keeffe with an abiding distrust of technology?

Do we need to know that Rachel was a world-famous artist and that Keeffe risked everything she values to follow in her mother's footsteps?

Do we need to know that the crucifixes and crosses Rachel sculpted create pockets of human kindness around every church where they're displayed?

Do we need to at least suspect that Keeffe's step-mother is a she-demon from Hell, sent Aboveworld on a mission to destroy Rachel's legacy and ensure none of her children become artists?

I've read rules of thumb that say "No backstory in the first three chapters."

Jenny Crusie's rule was, "no backstory, ever." (If this seems impossible, I invite you to read Bet Me, Jenny's Rita® award-winning romance that takes place firmly in the here-and-now.)

According to Donald Maass in The Fire in Fiction, "Later in the novel, backstory can become a revelation; in the first chapter it always bogs things down."

The rule I strive to keep around backstory is, "put in the least your reader needs to know."

The less backstory you load into the early chapters of your book, the more story questions there are to intrigue your readers.

So maybe that's the answer. Choose a situation where just the basic premise—police detective works to find a kidnapped child—is sufficiently engrossing. Then you can layer on additional information to intensify the situation--this police detective screwed up a previous case, resulting in the child's death. And then the final touch: it was his child.

So maybe I don't need to figure out how much backstory to put in. Maybe what I really need to do is figure out if I have a strong enough premise to make a compelling starting point.

What about you? If you're a reader, how much do you like to know at the beginning of a book? If you're a writer, how do you decide what goes in the first scene or chapter?

*The Least You Need to Know is also the title of a fabulous book of short stories by Lee Martin, professor emetitus of English at The Ohio University. It includes a story of the same name. If you love top-notch short stories, I recommend the book and especially that story.


Posted by Jeanne Estridge at 8:45 AM