The Chronicles of Breast Cancer: Part 5--Glow in the Dark Fun 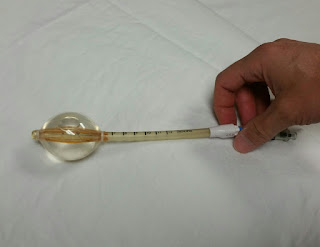 This week was all about radiation treatments. As you may recall from my last post, I decided to go with partial breast radiation, where they insert a balloon catheter into the site of the lump.

This is the kind of balloon catheter I had. You'll be glad to hear they did not insert it at 7 o'clock, more like 11. Under local anesthesia, so easy-peasy.

They put it in last Friday.I had to keep the site where it exited my body dry, so I wasn't able to shower,


On Sunday night, Old Dog cut a neck-hole in a trash bag and had me put it on. He stripped down and got in the shower with me (this is what passes for kinky sex at our house) and washed my hair. Nothing like having clean hair to make you feel human again.


On Monday I started treatments. The treatments went like this: first step was a cat scan, so they could make sure there was no extra air or fluid surrounding the balloon. The scanner looked like this:


Lights whirled around that track, taking pictures from 360 degrees. Then the computer assembled them into a single picture that looked like this: 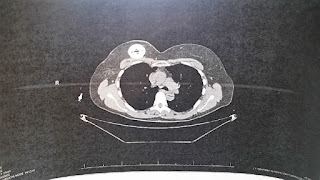 The stuff in white are my spine, my ribs and my scapula--and the balloon, of course. The black ovals are my lungs and the gray stuff in the middle is my heart. (Finally. Irrefutable proof.) It's a slice of me. 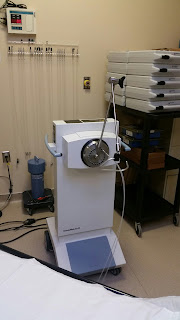 Then they took me into a lead-lined room (with an 8-inch thick door) and hooked me up to a machine called an After-Loader..

A thin wire pushed a radioactive isotope down one of those plastic tubes and into a channel on the balloon. My balloon had five channels, but we only used three. The other two were too close to my skin or my chest wall, and they didn't want to burn me.

The isotope stayed there for around 2 minutes (shorter time for brand new isotopes, longer if they've had time to decay). After three rounds,one for each channel, they redressed the wound and I went home, returning six hours later to do it again.

The box on the wall measured the amount of radiation in the room. I saw it get as high as 524.3, but I have no idea what that means.

Today was the last day. After my second treatment, they deflated the balloon and removed it.

And now this is all in the rearview mirror.


Posted by Jeanne Estridge at 9:19 PM