On Monday I started my 5-day whirlwind radiation therapy.

When you do radiation via a balloon catheter, you actually wind up being treated by a physicist rather than a physician. (There's a physician present. He just isn't very involved.) The physicist does the math to ensure you're getting the right dosage at the right location.

When my treatment, which lasted about 6 minutes, was done, my physicist brought out a rectangular brown metal box with a wand. He waved the little wand in front of my chest. It was silent. 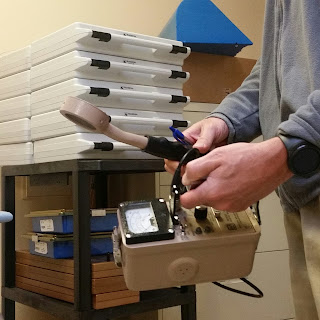 I was entranced. "Is that a Geiger counter?"

Apparently, many, many years ago, back at the dawn of radiation treatment, there was an incident where they sent a patient back to the nursing home with the radioactive isotope still in their body and "people died." (Not "person," mind you, but "people.")

When I posted this picture on Facebook, a writer friend pointed out that all the great superheroes start with radiation--Spiderman, the Hulk, Teenage Mutant Ninja Turtles.

That got me to thinking: what would happen if the Geiger counter wasn't silent? What if the physicist waved his wand and that Geiger counter started chattering like a monkey whose banana has been stolen?

They'd remove the isotope, obviously, but not before suiting up in HazMat gear. (Because there would be dangerous levels of radiation in the room.) Meanwhile, radiation would continue leeching into me.

By the time they got the isotope out, irreversible changes would occur. I'd become Senior Mutant Ninja Grandma!

Which raises the question: what kind of superpowers does a Senior Mutant Ninja Grandma have?

Voiceover: Faster than a motorized shopping cart. More powerful than a Millenial protest song  Able to leap tall curbs at a single bound (of her walker).

This is why you don't see senior superheroes.

Posted by Jeanne Estridge at 2:47 PM