To Sue or Not to Sue

A couple of weeks ago I was in a car accident. I'm fine, the car will be fine and the other driver is fine, although from the presence of her antifreeze on my bumper, I'm pretty sure her car was totaled. :-(

Brief summary of the crash: I was driving on a busy road that is currently down to a single westbound lane, due to construction. I stopped at a light. After it turned green and I drove on, my engine started to rev for reasons I still don't understand. Within an eighth of a mile the engine was roaring like a cyclone and the tachometer was registering 6000 rpm.

I checked my rearview mirror. The closest car was maybe five car lengths behind me. I lifted my foot off the accelerator. The tach didn't drop, so I put on the brakes. And then the driver behind me slammed into my rear bumper.

My little Subaru now has a severe under-bite and will be spending some quality time at the same shop that fixed her up after I drove her through the back wall of the garage. 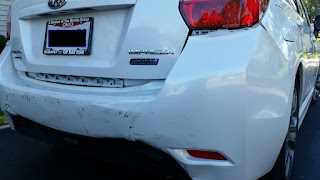 Told you that to tell you this: Two days later I started getting bombarded by calls from people offering to represent me in my pain and suffering lawsuit. Here are my issues with that:

1) I don't have any pain and suffering. I have a minor annoyance because I have to take my car into the body shop. And it's less annoyance than last time, because at least this time I don't feel like a total idiot.

2) Even if I had suffered an injury, I have health insurance and her car insurance would cover my deductible and co-pays.

3) Bottom line is, I don't believe in suing people for making mistakes. If there's ill intent, or you suffer so much damage it's going to cost you a lot of money, then maybe. Otherwise, forgive and move on.

Life is too short to spend it trying to make a buck off someone else's bad judgment.
Posted by Jeanne Estridge at 4:52 PM