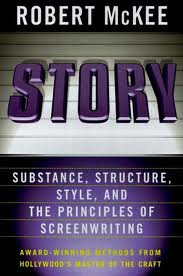 (Yeah, I know it's Saturday Sunday. Give me a break.)

Last week we analyzed Twilight using the beat sheet developed by the late Blake Snyder. This week, we'll look at it based on the precepts of Robert McKee, Hollywood's grand master teacher of script-writing and author of Story.

Assuming Twilight is a story in 3 acts of Bella and Edward's star-crossed love, the act structure looks something like this:

According to McKee, each of these points should represent a turning point in the story, where the action turns in a completely different direction.

So on that basis, the story works well.

The turning points listed above should turn as follows:

So, based on the value of "love" (which is the overarching value in this story):

Act 1 Climax: Bella realizes Edward is a vampire. + to -
Midpoint: Bella and Edward realize they're in love. - to +
Act 2 Climax: James spots Bella and decides to make her his quarry. + to -
Act 3 Climax: Edward rescues Bella from James. - to +

So, at a macro level, the story works well. Especially since the degree of negative/positive movement in the situation intensifies over the course of the book.

On a more micro level, scene outcomes should also alternate positive and negative, based on some value held by the protagonist (or POV character). So let's look at the first few scenes of Twilight.

As you can see, Meyer does a great job of alternating her value changes, impelling the story forward and pulling us along with it. The other thing I found interesting was her use of sequels. Sequels, as you probably know, are designed to allow the protagonist (or other POV character) process the scene that just occurred and decide what to do next. It also lets the reader take a beat. Meyer shows that sequels can also be used to let the author slip in a needed value change.

Next week: Characters or Why Twilight Sold a Bazillion Copies
Posted by Jeanne Estridge at 1:42 PM