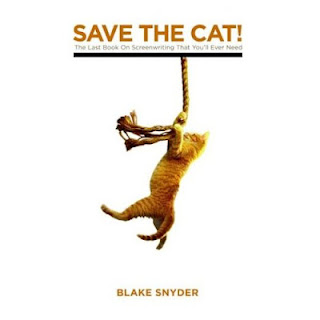 There are many ways to analyze plot structure in novels, plays and movies. The one I'm most familiar with are the Act/Scene/Beat breakdown taught by Robert McKee in his book Story and in his seminars.

Another, one that's probably a little easier for the neophyte, is the beat sheet shared by the late screenwriter Blake Snyder in his book, Save the Cat.

If you're interested in learning to plot better, you can't find a better place to start than with Snyder's book.

The table below represents Snyder's Beat Sheet, which assumes a 110-page script. I was looking at the trade paperback version of Twilight, which ran 498 pages. Because Snyder recommended that certain things happen at specific intervals in a movie script, I've listed the appropriate page numbers from the script and applied a multiplier of 4.54 to calculate a similar spot in the book.

Where Twilight varies from Snyder's recommended placement of a beat, I've indicated the suggested spot with a strike-through, followed by the actual page number(s). As you can see, up to about the midpoint, Meyer sticks pretty close to Snyder's beats, then blazes her own trail. Which is interesting, because it's that last quarter of the book that has all the action. It's relatively cerebral up to that point.

Also, Twilight doesn't really have much of a B story. For lack of anything better, I treated the "Bella settles in at a new high school" as the B story, but it doesn't get much page time.

Note: In a normal book/movie the A and B stories get switched when you move from the printed page to the screen. This is because the A story in a novel tends to occur too much inside the protagonist's head to translate well to the screen. The B story tends to be more action-oriented, which works a lot better for film.

Next week: Acts/Scenes/Beats (different kind) value changes and rising action.
Posted by Jeanne Estridge at 7:30 AM