Barack and the Beanstalk 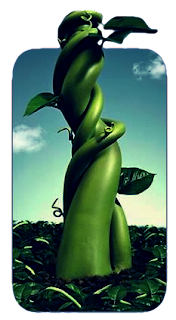 Once upon a time, there was a family who fell upon hard times. They'd been on a spending spree for eleven years, buying wars and banks and a couple of car companies. Then their income dried up and they realized they'd spent not only all their money, but all their children's money, and even their grandchildren's money.

All they had left was a cow.

This had happened once before, and that time they bred the cow and turned it into a whole herd of cows and they were able to use the herd to work their way out of debt.

This time, though, no one wanted to spend money on all that bull.

So, even though they knew that their cow was their only hope for the future, they decided to sell it.

So they sent young Barack, who was charming and smart (though not much of a scrapper) off to the big city to make the best deal he could in exchange for the cow.

"Trade it for food," his mother said, because she was soft-hearted, and worried about people having enough to eat.

"Sell it for money," said his father, who like to think of himself as fiscally conservative, even though he was the one who'd done most of the spending over the past eleven years.

But when young Barack got to the city, he fell among slick-talking businessmen who talked him out of trading the cow for food OR money. Instead, they convinced him to trade Bessie for a handful of magic beans.

They told him if he planted the magic beans a beanstalk would grow right through the ceiling, and he wouldn't have to worry about it again until 2013.

And that's just what he did.

Posted by Jeanne Estridge at 3:47 PM