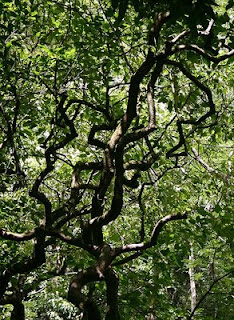 The last house that Old Dog and I owned sat on one of those wedge-shaped "makeup lots" that abound in housing developments with winding streets. The front yard was tiny, but the back fanned out into a huge area.

We bought it from an old guy who had done nothing with the yard for the previous fifteen years except maybe cut the grass. By the time we moved in, it was a jungle back there. Old Dog claimed he heard monkeys and macaws screeching from the overgrowth when he mowed. In fact, he couldn't get within five feet of the back fence with the lawnmower because it was just too dense.

As you may have realized by now, Old Dog is not a fan of clutter, and overgrown brush falls squarely into his definition of clutter. I kind of liked the privacy of fourteen-foot high bushes, but on the other hand, I wasn't the one being attacked by jungle vines. So, when he wanted to chop it all down, I agreed.

After we ripped out all that vegetation, all that was left was a rusty chain-link fence. To be honest, I've seen 1930's Dust Bowl pictures that were more attractive than our back yard once those bushes were gone. (Over the next few months, we had all the stumps ground up and planted grass, but that came later.)

To make matters worse, unbeknownst to us, on the other side of the fence, the three neighbors whose yards backed up to ours (see mention of "winding streets" in first paragraph) had kept their side neatly trimmed. And, like me, they really liked the feeling of wooded privacy afforded by those bushes.

I mean, really liked it.

I remember one particularly painful conversation with the woman who lived directly behind us. As she surveyed the wreckage of all her shade plantings, which survived their first taste of direct sunlight for about two days before shriveling up like tiny vegetative vampires, she called us every ugly name we'd ever heard. And a couple that were brand-new.

Every time we stepped out the back door, we could feel the laser eyes of hatred trained on us.

One of the neighbors told me she actually called the police to file a complaint about our vandalism and apparently cussed them out, too, when she learned she had no say-so over what we did with our yard. Two weeks later, using whatever mismatched posts and boards she could lay her hands on, she put up a privacy fence. Needless to say, she put the ugly-side-out.

The next spring we sold that house and moved here and one of the best things about that was getting away from the crazy lady on the other side of the fence.

Posted by Jeanne Estridge at 7:22 AM