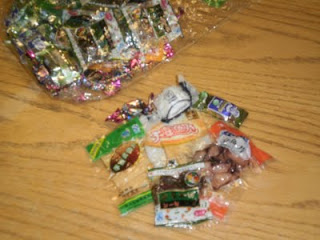 The Carry-In Effect is a scientific principle that explains why office people will eat anything that is carried into the workplace by another employee.

(Lest you think I'm being snarky about my office mates, let me say right here that I am usually first in line.)

I got a chance to witness the Carry-In effect in action last week when one of my co-workers brought in something he said was "Chinese candy."

Apparently, the Chinese notion of what constitutes candy is very different from the American view. There were no Snickers, no Reese's Cups, no Hershey bars. There wasn't even yucky candy like Sweet Tarts, Mary Janes and the fruitcake of Halloween candy, Sixlets. Instead, the assortment included dried octopus, fish jerky, a preserved plum (which looked like a mummified, candied prune) and several things we couldn't identify.

Despite this, and despite knowing there are lead-contamination problems with Chinese foodstuffs, and even despite knowing we're computer programmers who need all of our brain cells to earn a living, we eventually sampled everything. (Except the prune. Go figure.)

In the gleeful free-for-all atmosphere that is part and parcel with the Carry-In Effect, it was only after I chomped the octopus down to a swallowable cud that I thought to check the expiration date.

Maybe it should be called the Carrion Effect.
Posted by Jeanne Estridge at 7:23 PM