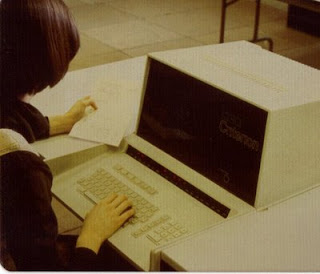 The above picture shows me operating an NCR Criterion 8550, a computer that took up half a very large room (counting the disk drives, card reader, CPU and tape drive) at the college and had 128K (that’s right – not Gb, not Mb, but K) of memory. The operating system could be divided into 3 partitions – 56K, 56K and 16K – and used to run 3 different programs at a time. Our accounting system was written to run in 16K through the use of overlays – bits of code designed to swap in and out of memory as needed, in order to be extraordinarily efficient in the use of memory.

Which is why you’ll sometimes hear me sneer about the code that’s being written today, because it could be a lot more efficient than it is, which might make it faster than it is.

Okay, I’m done with my “you kids get off of my lawn” rant. Onto the non-geek part of the story, another installment of the Tim and Tom Show.

Tom was, without question, one of the most competitive people I’ve ever met. At a softball game, after his team protested a call by the umpire, but were overruled, a female fan from the other side mocked them, “Baby! Baby!” He grabbed his crotch and yelled, “I’ve got your baby right here.”

The umpire was not amused and Tom left the game.

When I was 26, I used to jog a lot, as did another girl in the office, Chris. Tom bowled (and drank) in leagues 5 or 6 nights a week, and he had nothing but contempt for our healthy lifestyles. Taunts were exchanged, one thing led to another, and Chris and I challenged him to a bowling match: our combined scores against his.

The college had a six-lane bowling alley in the basement of the gym. After a couple of weeks of trash talking, the entire department turned out to watch the match. Let me pause to say that although Chris was a good all-around athlete, I am not. I barely have enough coordination to jog. But I’d been bowling in a league that winter, and had managed to get to the point where I could roll a 140 with some regularity. (I know. I suck. I already told you that.)

Anyway, that day, as I advanced to the line, Tom called softly, “Watch out for the snakes.”

I stopped and turned, “What snakes?”

He sidled up behind me and pointed over my shoulder, his eyes gleeful. “The gutters. They’re just like snakes, waiting to eat your ball.”

I threw that ball right in the gutter and after that, every time I’d get up to throw, he’d holler, “Snakes! Snakes! Watch out for the snakes!”

I think I rolled a 53, and Chris didn’t do much better. He slaughtered us. Which he made it a point to mention about 20 times a day.

Since we couldn’t beat him on his turf, we decided to challenge him on ours. A footrace, over one mile, on the track in the gym. If either of us beat him, it was a vindication of women. I’d just run a 10K, and my best split was a mile in seven and a half minutes, so I was pretty confident.

Chris and I changed in the women’s locker room, determined not to lose again. When we saw Tom’s get-up – shorts that looked like they were left over from high school gym class and Converse high-tops – we were sure we had him this time. He didn’t seem worried though. In fact, he snarfed down a Mr. Goodbar while we were standing there, waiting for our timekeeper.

Chris and I both started out at a good pace, but she started to fade after half a mile, leaving me on my own. And then a funny thing happened. I started to hear the soles of those Converse shoes slapping against the tartan surface of the track. Slap. Slap. Slap. They were getting closer.

I redoubled my efforts, but I could hear the foot-slaps speeding up. Slap! Slap! Slap! As I reached the final lap, he passed me, winning easily. Surprisingly, though, he didn’t stick around to rub my face in my loss. Instead, he took off immediately for the men’s locker room.

He didn’t return to the office for over a half-hour, and when he did he was uncharacteristically quiet.

Finally, we womanned up and entered his cube. “Go ahead. Say it.” I said.

“You two look like you’re feeling okay,” he said.

“After the race,” he said, “I went into the locker room and threw up that Mr. Goodbar. One peanut at a time.