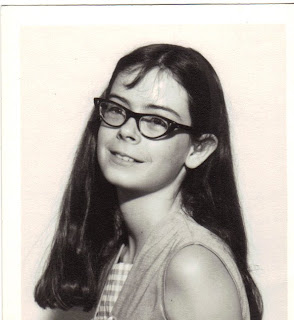 The above picture was taken near the beginning of my 10-to-20 decade. Gotta love those bangs – can’t understand why they didn’t start a fad. My teenage years were as angst-ridden and tedious as anyone’s, so we’re going to skip to the end of that period – when I was precisely 19 years, 6 months and 1 week old.

The day my daughter was born.

It was mid-August and 10 days past my due date. I’d just been to see Old Quack two days before. After checking me out, he said, “We must have calculated your delivery date wrong. Looks like it will be another month.” Then he gave me a short lecture on being sensible when I delivered, “You’re not going through the valley of the shadow of death, you know,” and sent me on my way with one last bit of advice. “If you don’t want to wait, try taking castor oil. If you’re ready, that will speed things along. If you’re not, it won’t hurt you.”

After another giant-bellied, sticky weekend of no air conditioning, by Monday I was ready to give it a shot. I downed the stuff, then headed, along with my clueless young husband (CYH), over to my in-laws to do laundry. In their basement. Up and down the open wooden steps a dozen times as I loaded and unloaded dirty to wet to dry clothes. (Note: CYH carried the basket down the stairs.)

At some point, I started having labor pains, which grew more intense as time went on. But Old Quack had warned me not to overreact. “Wait until your pains are regular, or they’ll just send you back home.” Sometimes the pains were five minutes apart, but sometimes they were six, and I wasn’t sure that was regular enough, so I just waited. Until the frequency increased to four minutes apart, and my MIL said, “Honey, I really think you ought to go on to the hospital.”

So I changed out one last load of laundry and piled into our Plymouth Satellite (who’s hood stretched out even further than my belly) and headed for the hospital. A few minutes into the trip, CYH made a turn that did not, on my mental map, lead to the hospital.

“Where are we going?” I gasped.

With great forbearance, I did not mention that we hadn’t needed him to get into this situation.

We double-parked in front of Ron’s house and CYH ran up to the door. A moment later, he jumped back into the driver’s seat and Ron slid in on the passenger side, leaving me to straddle the hump. Which really didn’t matter, because by then I was not likely to be comfortable anywhere. Ron timed my contractions and confirmed that they were two minutes apart.

“Man, why didn’t you warn me?” he demanded, lifting one sandal-clad foot. “I would have worn something with shoelaces.”

I’ll never forget the wide-eyed terror on Ron’s face when the ER nurse asked him if he were the father. Ron, who was usually as smooth-spoken as a snake-oil salesman, was for once bereft of speech. He just shook his head and mutely pointed at CYH.
After parking the car while CYH walked beside the orderly wheeling me up to the maternity ward, he kept CYH company for the two hours until I delivered my beautiful daughter. (It would have been sooner but the nurse told me not to push because Old Quack wasn’t there yet.) All I can say is, thank goodness Ron was there.

Because I’m not sure my husband would have made it through the birth without him.
(Note: Ron went to high school with CYH and me. He and CYH co-edited the sports page of the school paper. I had the editorial page. It was a pretty nerdy little clique, that paper.)
Posted by Jeanne Estridge at 5:00 AM