This Friday I will turn 55. Which is just the coolest thing, because it's a Significant Birthday.

What's a Significant Birthday? A birthday that has some legal or cultural significance. (Okay, I made that up, but I can, because it’s my birthday.)

Anyway, in honor of this major event, which I've waiting on for, like, 55 years, I'm going to do a post for each decade of my life this week. Today, zero to 10. 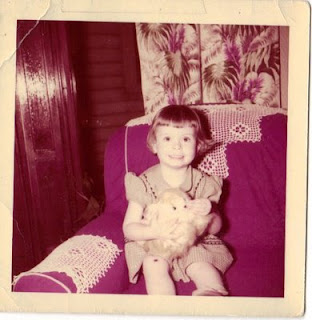 Although the tike in the picture looks really adorable, I was apparently a real pain-in-the-ass as a child. As in, when my mom found out she was pregnant with my younger brother she sat down and cried. Of course, the fact that my sister, Rita, is only 16 months older than me and my brother, Lynn, is only 20 months younger might have had something to do with it.

Mom said that one time I climbed up onto the sink and invaded the medicine cabinet, eating an entire bottle of baby aspirin and washing it down with a bottle of Castoria and a mercurochrome chaser. They rushed me to the doctor, who looked me over and said I was fine, the drugs must have counteracted each other. (The old quack.)

Another time, she asked Rita to keep an eye on me while she ran down to the basement to check on the laundry. When she came back up, I had lit the broom on fire and was swinging it around my head. And Rita, wide-eyed, said, "I'm watching her, Mommy." (She never was much good at stopping me from doing things, because when she tried I'd punch her in the stomach.)

And there are other stories, involving bringing bugs into the house and storing them under my pillow and then getting mad when I went back to retrieve them and they weren't there. And carrying bees around inside my closed fists, explaining, "They won't sting you if you don't frighten them.”

The worst one, though, without a doubt, was the time I took the magnet from my paper doll set (remember those paper dolls whose clothes adhered via little magnets?), unscrewed the bulb from Rudolph-the-Red-Nose-Lamp, and stuck the magnet into the socket to see what would happen. Mom and Dad were in the living room, watching Ed Sullivan, and I still remember the blue spark that shot out before all the lights went out and then the sound of Mom's voice in the darkness, saying plaintively:

"Oh, lord, what has that child done now?"

Posted by Jeanne Estridge at 5:00 AM