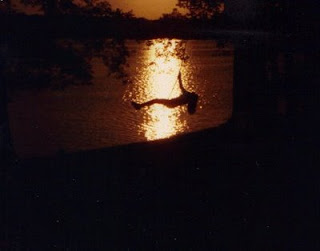 The above picture was taken by my second husband, Captain Oh-Wow, to whom I was married for six years during my fourth decade. He was a good photographer, so lots of pictures exist of me from this decade.

I have a theory that at some point during Captain Oh-Wow’s life, he’d been abducted by aliens. I’m not (just) being mean. It explains so many things about him:

1) His total fascination with science fiction movies. Including dubbed Italian C-grade total crapola movies. The special effects budget for those things must be, like, $3.25.
2) His tendency to freak out anytime there were strange lights in the sky. As in, freeze in panic until he could figure out what they were. Including during sex.
3) The fact that all his dreams took place on other planets.
4) The fact that he had no fucking clue how life operates on this planet.

Rather than bore you with a tirade about his various weirdnesses, I’m going to share a single quirk.

He loved to pick up things that he found on the road. We’d be driving along, and he’d spot some unidentified object lying on the berm, or in the ditch, or even trailing along the white line, and he’d stop the car, snatch up the object in question, and toss it in the back seat, where it would lie till he got home and had a chance to examine it. Sometimes he found useful objects; more often there was a reason someone had tossed the item from their car.

I tried to be supportive about this little addiction and evolved an entire scoring system, as if it were an Olympic event. I gave separate points for technical merit (the value of the item grabbed) versus artistic (the grace with which he stopped the car, including the impact on traffic behind us). A moving snatch, without coming to a full-stop, gained him a full 10 for artistic merit.

On the down-side, the time he grabbed up a green knit sweater, only to discover someone had used it to wipe their baby’s butt before pitching it, I had to award him a zero for technical.
Posted by Jeanne Estridge at 5:00 AM