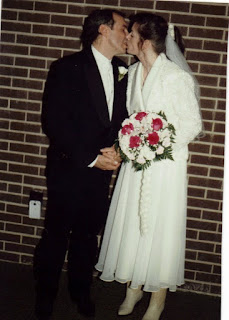 This is a picture from the second-most significant event that happened when I was in my forties – my wedding to Old Dog (then a much younger dog). I met him at a cowboy bar OR we were introduced by mutual friends.

Both of these statements are true. I generally choose which version to tell based on the reaction I’m looking for.

One evening a few months after Divorce #2 was final, mutual friends invited me to come out to a cowboy bar where they went to line dance and two-step. After I’d been there for a half-hour or so, Not-so-Old-Dog came over to our table, and my first thought was, “Ooh. Nice eyes.” My second thought was, “Get me a silver crucifix and a rope of garlic.”

A month or so later, I got a job offer from Up North and moved away. I exchanged a couple of letters with him, but soon had to let him know that I was dating someone up there.

Two years later, I came home for my sister’s wedding and ran into him again. By then I’d broken up with Mr. Right Now and Not-so-old-Dog still had nice eyes. And some other stuff that was looking pretty good, too.

Still, I don’t know if it would have turned into anything except for one thing: the friend who’d introduced us told me that someone had given him a picture taken that first night we’d met. And for the past two years, even after I sent him that “Dear Dog” letter, even while I was dating someone else, he’d carried that picture around his wallet.

He told me later that he’d always figured that when I got married it would be time to take the picture out of his wallet and throw it away.

But he never has.
Posted by Jeanne Estridge at 5:00 AM