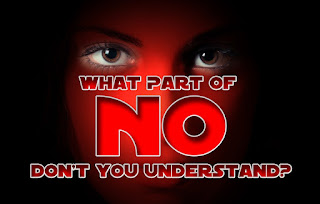 Recently, I went back and read a make-out scene I'd written a couple of years earlier, where the guy basically shoves my heroine up against a lamppost, sticks his tongue down her throat and presses his erection against her belly. At the time I wrote it, it seemed sexy. It was also well justified because the male character was possessed by a demon. (Although the demon's actually the good guy and the bad behavior is all on the part of his human host, but that's a whole, quirky story--The Demon's in the Details, coming in October, 2017).

When I reread the scene in light of Harvey Weinstein/Kevin Spacey/Roy Moore/Louis C.K./Matt Taibbi/Al Franken/ad infinitum/ad nasuem, it didn't work for me anymore. I didn't like the hero for what he did, I didn't like the heroine for not punching him in the face for doing it, and I didn't like myself for perpetuating the myth that men who ignore a woman's right to affirmative consent are sexy.

I went back and rewrote the scene. My hero still has to be a little off-the-chain because of the whole demon-possession thing, but he at least starts by asking to kiss her.

I've seen other writers on Facebook say they're having the same experience--when they review scenes with alpha heroes making alpha sexual approaches to their heroines, they realize they're no longer comfortable with what they've written.

Here's the problem: alpha heroes tend to go from their gut. They trust their instincts, so when their instincts say the woman is interested and willing, they believe it. They're not given to lsecond-guessing themselves, or long, chatty conversations. None of this is a great setup for politely requesting affirmative consent.

On the other hand, it is doable. After the rise of AIDS back in the eighties and nineties, romance authors began mentioning condoms in their love scenes. These days, I rarely read a detailed love scene that doesn't specifically call out the use of a condom.

I suspect that, because of the Weinstein, et. al. (and it's starting to look like I do mean all--two of my state representatives have resigned in the past couple of weeks over unspecified "inappropriate behavior"), we'll start to see more explicit mention of affirmative consent.

I think we may also see a rise in the number of beta and gamma heroes. Beta heroes are gentler than alphas, more sensitive to the heroine's needs, less prone to jealousy and general bad behavior. Gamma heroes are a mix of alpha and beta--the strength and the "bad boy" traits, but not possessive and arrogant, as the alpha tends to be. These guys would have no problem asking for affirmative consent.

What do you see in the future for romance heroes?


Posted by Jeanne Estridge at 8:08 AM