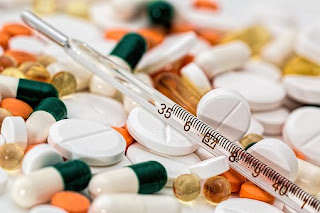 At a recent meeting of my Romance Writers chapter, one of the other members shared a story about a fellow member who writes really great sex scenes.

"She goes to a compounding pharmacy and has them make her up this cream that's a mix of estrogen and testosterone," she said."She rubs it on her arms and it puts her in the mood to write sexy."

Half of me had to applaud the woman's creativity and the sheer dedication to the craft. The other half was absolutely horrified. Adding a lot of extra hormones to your system, especially estrogen, is a recipe for breast cancer.

The other writer shrugged. "You have to do something after menopause. Otherwise you wind up writing women's fiction."

(This cracked me up. The polarity between Dems and Republicans is nothing compared to the divide between romance and women's fiction writers.)

Fast forward three days and I met the third and final doctor in my triad of oncologists--my medical oncologist. (Not to be confused with my surgical oncologist or my radiation oncologist, each of whom sends a separate bill.)  Because my tumor was estrogen and progesterone receptive, he recommended I take a drug called Letrozole.

Since I'm post-menopausal, my ovaries no longer produce estrogen, but the adrenal glands that sit atop my kidneys still do. Letrozole binds itself to those estrogen molecules, preventing the hormone from making more tumors.

That's what it's being paid to do, anyway.

Unfortunately, it throws in some extra services for free:

That last one caught my attention.

If I took this drug I'd have to give up romance writing. Not that I dislike women's fiction. Done well, it's amazing stuff. Done poorly, it's just one more novel about recovering from breast cancer and/or dealing with widowhood.

I told the doctor I'd have to think about it.

The other morning, while I was walking the dog, I had an epiphany. If I refuse to take Letrozole because I don't want to give up writing romance, it's really no different than the writer who smears hormones on her forearms to get into the mood. Well, there's one difference. I know I'm at risk.

I think it's time to woman up and take my medicine.


Posted by Jeanne Estridge at 3:02 PM