Detour Off the High Road

The other day on Facebook, a friend posted that, although he understands the Dems desire to get even with the Republicans for refusing to consider Merrick Garland for the open Supreme Court position when Obama was president, he thinks they should take the high road and give the American people a full roster of justices without attempting to slow things down.

Here's the problem I have with that:

1) Democrats have won 4 of the last 5 Presidential elections, but we've gotten to inaugurate our chosen candidate only twice.

2) Under Republican-controlled State houses, gerrymandering has reached a computer-modeled peak of effectiveness. Only about 15 of the 435 Congressional seats are competitive anymore.

Here's an example of what Republicans have done to ensure that as many Democratic votes as possible are herded into a single district in a kind of political apartheid. (North Carolina District 12) 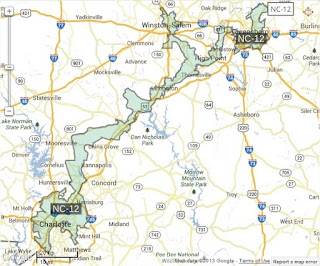 Note: The same thing occurs on the blue side in states controlled by Democrats. In California, 1/3 of the state voted for Donald Trump, but only 1/4 of the representatives are Republican.

3) The impacts of this gerrymandering are not limited to national elections. At the state level, Dems can no longer afford to compete in races they have no chance of winning. One third of state legislative seats were uncontested across the United States in 2016. In Georgia, it was 80%.

The long-term impact of this is that Democrats are no longer growing a bench for future national elections. The United States is moving toward a single-party system.

4) The only races left that are remotely fair are the Senate races, but even there James Comey and Vladimir Putin teamed up to give the Republicans a 52-48 lead on the coattails of their preferred candidate.

5) Eighteen days into Donald Trump's first term, it's painfully apparent that the GOP plans to rubber-stamp any unqualified (DeVos, Carson), bigoted (Sessions) asshat (Mnuchin, Price, Perry) he proposes for his Cabinet. They're so occupied with staying out of range of Twitter rants and Tea Party primaries they're making no attempt to ensure balance or even competence in our government.

Only two Senators voted against the confirmation of Betsy DeVos--Lisa Murkowski of Alaska and Susan Collins of Maine. Turns out the only two Republicans in the Senate with any balls are women.

And now you're asking us to give up what little leverage we've got--the fillibuster--to actually have some kind of voice in our not-very-representative government?

If that's the high road, I think it's time to reconsider our route.