I just got back from a research trip to Sedona, AZ, the setting for my work-in-progress and I was fascinated by the trees there. 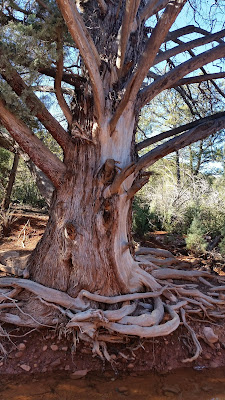 This one was in Oak Creek at Crescent Ranch Park. I should have had someone stand among those roots to give you an idea of scale. The bottom part of the trunk was roughly the size of one of those little Fiats you see everywhere these days. 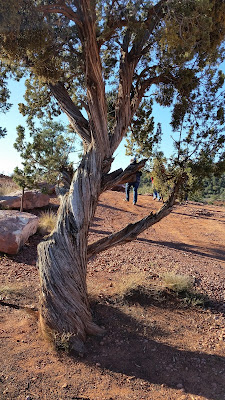 According to the New Agers, the Sedona area has four "vortexes," where energy converges. They claim magnetic resonances in these specific areas cause the trees there to twist as they grow. Kelly, the guide for our Pink Jeep tour, a great storyteller and not a New Ager, says the twisting happens when part of the tree is injured or diseased and the healthy part keeps growing. I don't know which is true, but the trees were as fascinating as the rock formations.

We saw this one at the vortex near Airport Mesa. 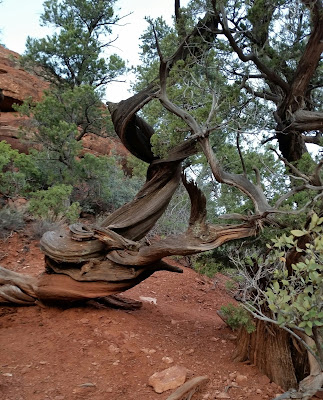 This one was my all-time favorite. Near the Bell Rock vortex, it looked like a sleek modern sculpture. 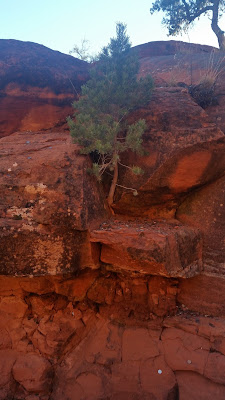 This one's not twisty, but I had to admire its spunk, growing on the side of a cliff. 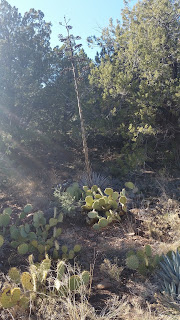 This one isn't a tree, it's a yucca plant. Have a little respect, please, because it's dying. The last thing dying yucca plants do is throw up a shoot that's 18 to 20 feet high. Which seems tragic, giving that last gasp like Mimi in La Boheme, until you learn that the DNA in those shoots are exact replicas of the original plant. It's not so much dying as giving itself multiple new bodies to start over with. Who wouldn't sign up for that?

This last one isn't from Sedona, but from the Desert Botanical Garden in Phoenix. It's the skeleton of a dead cactus. I always pictured cacti as being all mush inside, which doesn't make any sense, since mush couldn't hold up a forty-foot tall plant. What they have inside is the fibrous skeleton pictured here.
Posted by Jeanne Estridge at 8:00 AM