As I mentioned last week,according to Robert McKee, the famous screenwriting guru, a beat is "an exchange of behavior in action/reaction. Beat by Beat these chagning behaviors shape the turning of a scene." 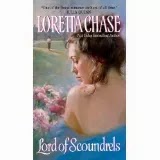 This week we're going to take a passage from one of my favorite novels, Lord of Scoundrels by Loretta Chase, and analyze the beats. Lord of Scoundrels is a historical romance, set around the turn of the 19th century. Jessica Trent, a beautiful and strong-minded young woman whose foolish brother, Bertie, has fallen under the influence of the infamous Marquess of Dain. Dain is causing him to drink more than he should, gamble more than he can afford and consort with prostitutes.

This scene takes place in a Parisian tea shop, where Jessica and Dain are haggling over a beautiful miniature Jessica unearthed in an antique store and which Dain desperately wants to own .


Beat One: Jessica offers Dain the icon as a bribe to leave Bernie alone. Dain misinterprets the offer as a taunt. The behaviour for this beat is banter.

"I shall gladly give it to you, my lord," she said.

"No one gives me anything," he said coldly. "Play your game--whatever it is--with someone esle. Fifteen hundred is my offer. My only offer."

"If you would send Bertie home, the icon is yours," she said. "If you will not, it goes to auction at Christie's."

(There follows a couple a pages of internal monologue giving us his state of mind and some fun dialogue.)

Her silver eyes flashed. "There is only one way for you to get it, my lord Beelzebub. You throw him back."

"No, you do not see clearly at all," he said. "There is always another way, Miss Trent. You think that because we're in a public place and you're a lady, I'll mind my manners.Perhaps you even think I have a regard for your reputation." He smiled evilly. "Miss Trent, perhaps you would like to take a moment to think again."


This is a turning point because we move from bribery to threats.

"Let me make it as clear as you did your own threat." He leanded toward her. "I can crack your reputation in under thirty seconds. In three minutes I can reduce it to dust. We both know, don't we, that being who I am, I need not exert myself overmuch to accomplish this. You have already becme an object of speculation simply by being seen in my company." He paused briefly to let the words sink in.

She said nothing. Her slitted eyes were glinting furious sparks.

"Here is how it works," he went on." If you accept my offer of fifteen hundred, I shall behave myself, escort you to a cabriolet, and see that you are taken safely home."

"And if I do not accept, you will attempt to destroy my reputation," she said.

"It will not be an attempt," he said.


This is a turning point because we move from verbal threat to action.


Beat Three: Dain pretends to make love (in the Georgette Heyer sense of the phrase) to Jessica in Italian in front of a cafe full of people.

And while in Italian he detailed his heated fantasies, he was slowly peeling the glove back, exposing a delicately voluptuous palm. Then he gave on e small tug toward her knuckles. And paused. Then another tug. And paused. Then another tug...and the glove was off. He let it fall to the table, and took her small, cool, white hand in his great, warm one.She gave a tiny gasp. That was all. No struggle. Not that it would have made the least difference to him.

He was overwarm and short of breath, and his heart pounded as though he'd been running very hard after something.

This is a turning point because we move from Dain's action to Jess's counter-threat, upping the stakes.

"Dain," she said in a low, hard voice, "if you do not release my hand this instant, I shall kiss you. In front of everybody."

Beat Four: Dain copes with the realization of how attracted he is to Jess while believing she cannot possibly feel the same way. Then her brother Bernie arrives.

Trent gave Dain an apologetic look. "Don't pay it any mind, Dain. She does that to all the chaps. I don't know why she doest it, when she don't want 'em. Just like them fool cats of Aunt Louisa's. Go to all the bother of catching a mouse, and then the confounded things won't eat 'em. Just leave the corpses lying about for someone else to pick up."

This is a turning point because Dain moves from the fog of sexual attraction to humiliation.

Beat Five: Dain processes his feelings, which are similar to how he felt as a schoolboy when older boys tormented him and decides he can't let Jessica win this round.

Climax: Dain invites Bernie over for an evening of dissipation.


This is a scene climax because Dain has refused Jessica's offer of the icon, instead choosing to keep Bernie within his sphere of influence.

Lord of Scoundrels is a thoroughly enjoyable read--great conflict, lots of fun banter, thoroughly likeable characters. You can buy it here.

Posted by Jeanne Estridge at 8:23 PM