Fiction Friday: James Scott Bell and the Big, Fat "But" 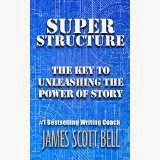 Last night I finished reading Super Structure: The Key to Unleashing the Power of Story by James Scott Bell and I have a problem with it.

First let me say I have a huge amount of respect for Mr. Bell. I know a lot of writers who swear by his many books on ficiton writing. A couple of friends have attended his workshops and say he's nothing short of amazing in person.

And, overall, I liked Super Structure. It was a little more prescriptive than I feel I need at this stage of my writing journey, but if you're looking for direction, it would make an excellent roadmap. I wish I'd had it in hand when I wrote some of my earlier books.

The particular point I have an issue with is his brainstorming advice. He says:

I like to take a stack of fifty or so index cards to my local coffee hangout. I get
my brew and sit in a comfortable chair. the I start imagining scenes. Whatever
picture comes into my head.

When I've got around fifty scene cards, which may take a couple of hours to generate,
I shuffle them and pick two at random and see what connections they suggest.

So, essentially, you generate a bunch of unrelated scenes and then try to identify the correlations between them.

Here's my problem: Correlation is not causality.

Matt Parker and Trey Stone, of South Park and Book of Mormon fame, once visited a NYU writing class and gave the class some advice.

Link out to see the 2:14 video--it's worth your time. Seriously, the idea encapsulated in this video is the single most important thing I took away from the McDaniel program. Do it. It's everything you need to know about plotting boiled down to two minutes and fourteen seconds.

Are you back? Good.

Spending time brainstorming and generating ideas, especially when you're in the zone and your muses are sending you all kinds of cool stuff, is time well spent, no question.

But once you've done that. instead of trying to force connections between them, I think it makes more sense to set all that on the back burner. Instead, think about where your story starts. Ask yourself, "That first incident in the book--what happens because of that?"  and then, in turn,  "What does that cause to happen?"

Even more important, ask yourself, "What couldn't happen? What is the outcome that my protagonist never in a million years expects?" (These are the "buts" that Parker and Stone talk about.) Hit her with a big, fat "but" and watch her squirm and struggle and burn down to her truest self trying to cope.

The stuff you've brainstormed comes in handy here because gives you all kinds of possibilities, but you need to select the possibilities that fall along a causal chain. Don't let yourself get so enamored of this really cool scene that you torque your plot around to accommodate it.

Because the true super-structure of any story is the chain of causal links that a combination of expected and unexpected yet completely logical events that draw your reader along like they're on a train that's gathering speed with every chapter and no way to get off.

Unrelated note: I just received word that my manuscript, Demon's Wager (formerly title Demons Don't) has made the final round of the RWA Golden Heart contest in the paranormal category. Winner will be announced at the end of July at the RWA conference in New York. Prayers, positive energy and crossed fingers all welcome!

Posted by Jeanne Estridge at 7:29 PM