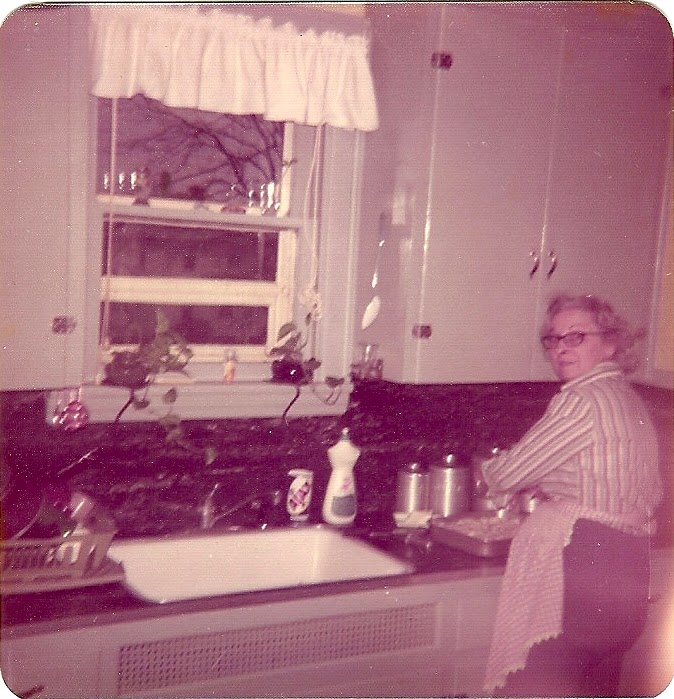 The other night as I emptied out the dishwasher, I was putting away, not just dishes, but a bunch of kitchen gadgets I own,  That got me to thinking about my mother's kitchen.

My mom cooked supper, from scratch, for nine people plus anyone else who happened to be hanging around at dinnertime, seven days a week, fifty-two weeks a year, with far fewer utensils than I have to nuke dinner for two.


Not only do I have all those items, but I'm pretty sure I couldn't put together a meal without them. The speed and grace with which Mom wielded her little collection of honed knives, metal forks and wooden spoons are far beyond my capabilities. And if I tried to open a package with a paring knife, it's anyone's guess which would release first: the package or one of my veins.

That said, Mom was, to put it kindly, an unpredictable cook. I remember one time she tried putting coffee in her drippings-and-flour gravy to see if that would make brown gravy. (It did, but only if you're judging stricly on color palette.)

And every sibling I have remembers the Great Chicken Paprikash Endeavor. Mom and Dad first tasted the Hungarian dish at a friend's house and Mom decided she was going to reproduce it. My oldest sister, who was married by then, came into town once a week to spend the day, so Mom scheduled her experiments for that day. Week after week. She never did get it exactly right, but she was eventually forced to abandon clinical trials when my brother-in-law threatened to go on a hunger strike if he had to eat weirdly orange chicken one more Monday in a row.

Just think what she could have accomplished with the Pampered Chef collection.


Posted by Jeanne Estridge at 7:50 AM