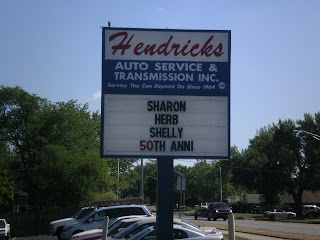 Today is the 15th anniversary of my wedding to Old Dog.

We were in our mid-40's when we married, making us statistically unlikely to be around to celebrate our 50th. (And, based on what I've seen with the old people in my family, even if we do, I won't know about it.)

To mark it, I changed my Facebook status to "married." (Okay, that may have had something to do with the message I received last week from some old guy from Iowa who wanted to "hook up and just see what happens" because he was so taken with my profile pic and assumed I was single because my relationship status was null.)

Here's the thing about the Dog: after 15 years of marriage, I still think he's the nicest man I've ever met. He tells the truth and keeps his promises. He laughs a lot. He listens to me (well, some of the time, anyway). When I've been gone for a couple of days and I walk back in the door, his face lights up like the sun just came back.He has a beautiful straight nose and the most kissable lips I've ever encountered. He thinks about things differently than I do, in ways that are both kind, and yet more realistic than I've ever been.

Happy anniversary, Old Dog. You delight my soul.
Posted by Jeanne Estridge at 7:33 AM