Lovely Abraham Powell, along with being my great-great-great grandfather, was reputed to be the meanest man who ever lived.

One day a deputy named Moody rode out to Lovely's cabin in Big Hill, KY, to arrest him for moonshining and tax evasion. Lovely came out of his cabin just as the deputy rode up.

"My wife is ill," said Lovely. "One of the neighbors is on the way. As soon as she gets here to care for my wife and children, I'll come with you peacefully."

But Deputy Moody was the kind of man who gets drunker on a little bit of power than Lovely's customers ever did on 'shine. He refused to wait.

Lovely put up a warning hand.

Moody didn't listen. He slid down from his horse and no sooner had his feet touched the ground than Lovely shot him through the heart.

Grandpa Lovely never served a day in prison for that shooting, though. The judge ruled Moody's death a suicide.

"Everyone around here knows that Lovely Powell is the meanest man who ever lived," he said. "He told Moody that if the got down off his horse he was a dead man. When Moody decided to get down anyway, he killed hisself."

The less interesting explanation for why Grandpa Lovely never went to prison for his crime is that his wife's brother was the Governor of North Carolina, who interceded. 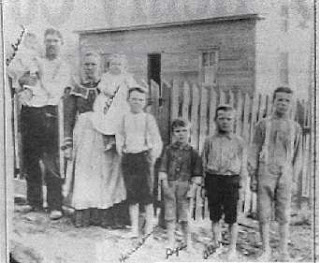 Lovely with his wife and children.

(Thanks to my cousin, Sue, who reminded me of this story. She prefers the factual version, but I tend toward the better story.)
Posted by Jeanne Estridge at 7:21 PM