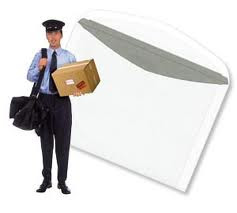 On Sunday I realized my my daughter-out-law's (she'd be my daughter-in-law, but in Ohio we don't allow that) birthday is Thursday. None of the cards in my current inventory were appropriate (because she wants to be neither a pirate nor a princess, for some reason), so I picked one up at the college bookstore on Monday and brought it home for Old Dog to sign.

Mistake #1: Because Old Dog hates writing checks to the kids (because they hang onto them for months before cashing them) I put cash in the card.

So now it's Tuesday morning and the card still has to travel to another city and get delivered on Thursday. Knowing that on-time delivery was a long shot, I stopped by the main Post Office and dropped it in the mailbox there.

As in, no postage stamp.

I'd just dropped an unstamped card with fifty bucks in it into the mail. I've seen sitcoms where people tried to retrieve letters from the Post Office mailbox (was that Lucy? Brady Bunch? anyone remember?) and it never worked. And even if it had, I wasn't going to try it right there in their parking lot.

So, I went inside and threw myself on the mercy of the postal clerk. Who took my contact info and money for a first class stamp and promised to retrieve it, stamp it and send it on.

Seriously, where else can you get that kind of service for 44 cents?
Posted by Jeanne Estridge at 12:08 PM