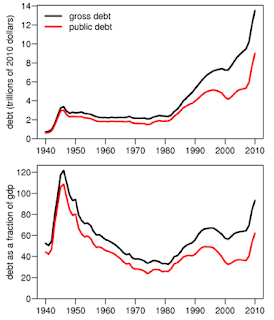 The above graphs represent our national debt in dollars, and as a percent of GDP. See how the lines are climbing? They look like the East Anglia version of the climate change chart. And the scary thing is, it's growing like that despite historically low interest rates. What happens when rates go up again?

Old Dog and I successfully used the following recipe to get our own financial house in order and while it may seem simplistic, I think it would work for the federal government, too:

I know cutting entitlements seems like breaking promises, but the fact is, we've promised more than we can deliver. At some point, we're going to have to admit that we over-promised and square accounts. And the sooner we do it, the less painful it will be.

2) Stop buying on credit. I'm not advocating a 100% balanced budget. We (almost) all buy big-ticket items like houses on credit, but long-term money should be used for long-term investments. I'm okay with deficit spending and accruing debt if we're buying infrastructure that will benefit the coming generations who'll have to pay it off. I'm not okay with sticking them with our dinner tab.

4) Stop building budgets that are sprinkled with fairy dust. When Old Dog and I budget, we don't include his potential overtime. Set up best, worst and middle-of-the-road scenario and figure out, realistically, what kind of revenue stream you can expect. You'll still get blindsided the next time the "we don't need no stinkin' regulation" banks figure out a new way to lie about their balance sheets, but most of the time it will work.

5) Make everyone pay their share. General Electric paid NO taxes last year (but that's a separate rant). When did Americans lose sight of the fact that paying your taxes is a form of patriotism?

Because anybody can stand around and jaw about how much they love America, but real patriots put their money where their mouth is.
Posted by Jeanne Estridge at 5:44 PM