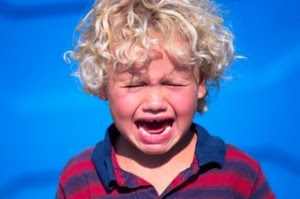 One morning after pre-school, as a surprise, my daughter drove my 4-year-old grandson to the gym for open play-time.

But when she went to get him out of his car-seat, instead of bopping into the gym for some happy tumbling around on the mats, he burst into tears.

"What's wrong, Phinn?" she said, totally caught off guard by his reaction. "You love tumbling."

He raised his tear-streaked face to her.

"But I wasn't thinking about this," he wailed.

Which leaves me with a couple of questions about how such a trait manifests itself in someone so young:

2) If so, how did he inherit it from his Step-Grandpa?

Happy Anniversary, Old Dog o' My Heart. Fourteen years of marriage and I've never (seriously) thought about divorcing you (although there were a couple of occasions where I wouldn't have ruled out homicide).
Posted by Jeanne Estridge at 6:29 PM