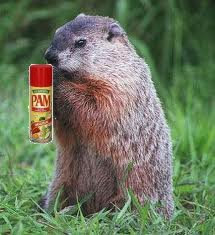 Back in the Bad Old Days, before Old Dog began doing the grocery shopping, we used to have a problem I called the Pam Syndrome.

Every Saturday morning would find us in the Baking Needs aisle, having this conversation:

Old Dog: Are we out of cooking spray?

Me: Yeah, but I remember noticing we were running low.

What I didn't remember, nor did Old Dog, was having this exact same conversation the week before.

It was like we were starring in our own version of Groundhog Day, but instead of having epiphanies and practicing at life until we finally evolved into good people, we just built up an inventory of cooking spray.

One memorable (or, you know, not) spring, we amassed 8 cans of the stuff before we managed to stop the madness.

Sometimes, instead of cooking spray, it was paper towels, or toilet paper. We once bought so much laundry detergent I had to donate it to the Food Bank (who, for your information, does not want laundry detergent, just food).

These days we get up on Saturday morning and I devise a menu plan for the week (which usually turns out to be a lot more ambitious than I actually feel when it's time to cook, but that's a whole separate issue) and then create a grocery list to ensure we have the stuff to make said menu. Then Old Dog heads for the grocery, a man with a mission, while I go hiking with my friend, Pauline.

So now that we've got the Pam issue under control, maybe it's time to work on Old Dog's sock collection.
Posted by Jeanne Estridge at 8:23 AM