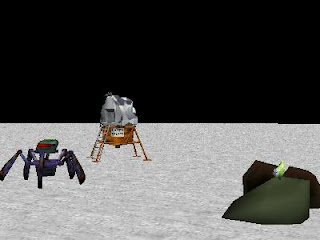 On Sunday morning, I decided to finish up my homework as soon as I got up so I wouldn't have to deal with it after church.

(Yes, the spider robot is kind of a chicken-shit. What can I say? He's not my protagonist.)

I was almost done when I decided I had too many rocks. Since I couldn't remember how to delete an object, I just resized one till it was too small to see. Only then, when I pressed the "play" button, the spider robot would just kind of spin in place with his legs hopping up and down like he was standing on a hotplate.

After a while, I figured out that the robot was trying to walk over to a rock that was too small to see. That was, apparently, right under his feet. I spent the next half hour trying to locate this rock molecule so that I could make it big again.

Turns out it's impossible to resize a rock you can't see.

I had to start all over.

Which is how I wound up at church on Sunday with bed-head and no make-up.
Posted by Jeanne Estridge at 5:00 AM