Change You Can Believe In

Watching the Healthcare Reform debate over the past few months has gotten me to thinking about why people have so much difficulty handling change.

Simple answer: because our brains are wired that way.

And why is that?

The brain has two separate areas for dealing with the familiar and the unfamiliar.

The familiar is handled by the basal ganglia:

Located in an older part of the brain, the basal ganglia are really good at routing stimuli down established neural pathways. Because the vast majority of the input we handle is repetitive (choosing food, cooking, eating, working, hygiene), the same activities performed in the same way, they don't require a lot of thought. The basal ganglia are highly efficient, and don't consume much nutrition.

The unfamiliar is handled by the pre-frontal cortex: 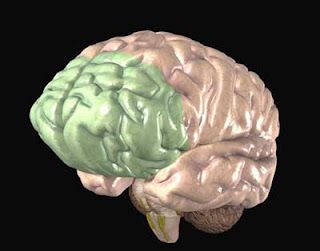 This is a newer part of the brain. More sophisticated, it does our high order thinking. And like a snazzy sports car compared to an economy model, it requires more fuel to operate.

Because we're built for efficient processing, as soon as a piece of stimuli reaches the brain, the pre-frontal cortex determines whether it's familiar in any way, and if it is, sends it along to the basal ganglia for handling. This is why the brains of older people, although not nearly as flexible in absorbing new information and technology, can perform rings around the brains of younger people when dealing with the familiar. (If you doubt that, watch an experienced doctor and a resident diagnose an illness.)

But because we're wired for efficiency, we bend toward sending everything down the old familiar pathways (aka "ruts").

To further complicate this, when the pre-frontal cortex feels overwhelmed by new information, it sends signals to the amygdala, the part of the brain responsible for "fight or flight." It doesn't take a lot of change to send the brain into full panic mode.

So how can we help ourselves, and others, deal with change?

We'll talk about that next week....
Posted by Jeanne Estridge at 5:00 AM