Fiction Friday: The Power of Persistence 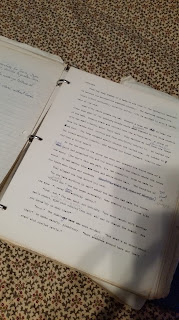 In the 1970's, I wrote (on a typewriter) a historical romance set in 1870's Wyoming called Wildfire Woman. It featured a rape of the heroine (romances were really rape-y back then) and no discernible plot.

Although the hallmark of the beginning writer is that we believe every word that dribbles from our pen (or platen) is a morsel of genius, even I knew it didn't work. After playing around with it for a few months, I put it in a drawer and (all but) forgot about it. 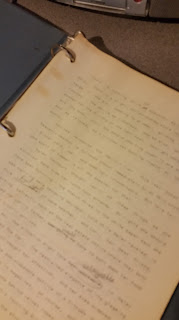 Then, in the 1980's, I tried again. Deciding I had maybe bitten off more than I could chew with a historical, I wrote a contemporary category romance. Because anyone can write a Harlequin romance, right?

This one I wrote on an early, early PC--a CPM-80 machine. This manuscript also lacked even that faintest vestige of a plot.

As far as I can tell, I never even gave it a name. 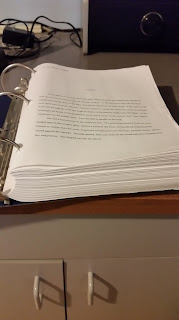 In 1994, while living in Minnesota, I became fascinated with the story of the Hinckley Fire of 1894, a forest fire that generated a mile high fireball that could be seen from Iowa, 90 miles south. I spent 8 years doing research. Determined to do a better job with this story, I signed up for a "Writing the Novel" class at my local community college. My amazing teacher, Tim Waggoner, told me that, in his opinion, my prose was at a professional level but my plot "meandered."

Grrr.(Frustration at myself, not Tim.)

Note the "thud factor" on this one--first draft came in at 120,000 words. If your first million words are indeed just practice, this one should have put me over the top. I wrote twelve drafts. I submitted it twice, but when the second agent told me she didn't think my writing was there yet, I agreed and went on to.... 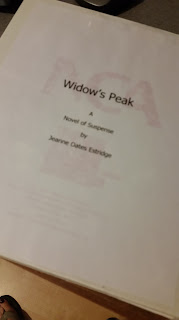 romantic suspense. Suspense novels are, almost by definition, plot-driven. By the time I completed it, I reasoned, I would have figured out this plotting thing.

Not so much. When I started shopping it, Jessica Faust from Bookends literary agency told me, "Your writing is strong and I love this idea, but your plot feels like you just threw in everything you could think of."

The pile in the drawer grew deeper. On to a work of women's fiction. While writing August Lilies, I attended Robert McKee's Story seminar, where I learned about the three-act structure and turning points.

I was getting closer, but I still wasn't managing to create compelling stories. I knew lots of people who were submitting all the time, but I was less interested in selling than I was in writing well.

Kent Haruf, who wrote the National Book Award-winning Plainsong, said, in an interview on NPR: It doesn't seem to me there's a scarcity of talent among students who want to write. But what there is  a lack of is a talent for work...it's so difficult to write and it takes so long to learn how to write well that most people give up on it before they get good enough.

I was determined not to be one of those people.

In 2012, I was ready to give it another shot. After spending the winter obsessed with Stephenie Meyers' Twilight series, I decided to write a paranormal romance based on the story of Job.

I laid out the framework for the book at a Plotting Weekend with Mary Buckham. Then I heard that McDaniel College in Baltimore was offering a Master's certificate in "Writing the Romance Novel." It would be taught by none other than Jenny Crusie. I'd only ever read one of her novels (Faking It), but from that one book it was clear that she knew how to plot. And she'd been an English teacher, so she knew how to teach. Plus, Nora Roberts had partially funded the program, so it wasn't insanely expensive.

And, glory hallelujah, Jenny finally managed to get the concepts of character and story arc across to me.

The proof of this is that on July 20th, 2015, nearly 40 years after I wrote my first book, my novel, Demons Don't (since re-titled Demon's Wager) won the 2015 Golden Heart® award for paranormal romance. That win rated a mention in The USA Today on Tuesday. I don't know that this will lead to traditional publication, but I'm taking it as a vote of confidence that my writing is finally "there." 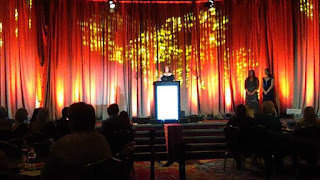 Malcolm Gladwell says it takes 10,000 hours to become an expert at anything. If I add up all the time I've spent on writing, I'm probably at twice that. (And we won't even talk about how much money all those conferences and workshops have cost.) But for the entire time I've been writing, in every class I've taken, I've been told, "The single most important trait a writer can have is persistence."

That, I have.
Posted by Jeanne Estridge at 4:46 PM