Of Dollhouses and Dress Socks

I like to think that I'm mostly immune to the American addiction to buying stuff, but once in a while something happens to remind me that I'm as sucked into this consumer culture as everyone else.

Last Thanksgiving, when Rachel Cotterill and her husband, Andy, came to visit, Rachel stood in the middle of my dining room and held her arms out and said, "American houses are so big." She has a basis for comparison. She and Andy travel a lot and they afford that by couch-surfing, so they've stayed in a lot of homes around the world. 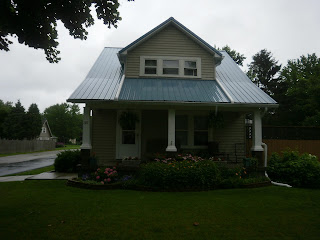 My house, at around 1300 square feet, is actually pretty small by American standards.Built in 1913, the house was originally heated by a central fireplace. In the 1920's someone put in a furnace and the resulting ductwork chopped a corner out of the master bedroom, leaving a space that's 70" wide and a foot deep.

Until two weeks ago, that bedroom was furnished as follows: one mission-style bed bought when Old Dog and I were dating, an oak dresser with a mirror some friends gave me when I got divorced, a cherry-veneered chest-of-drawers I bought from my older sister for $25 in 1974, and two Rubbemaid towers with clear plastic drawers.

So when I found a dresser that was 69" wide and matched the bed, along with a chest-of-drawers large enough to hold Old Dog's collection of brown pocket tees, I knew it was time to upgrade.

Now it stands to reason that any two pieces of furniture that replace four existing items are going to be sizeable, but when the sweating deliverymen finally managed to drag those monsters up the stairs and set them in place, they were HUGE.

I told Old Dog, "It feels like we're the wrong sized dolls for this dollhouse." 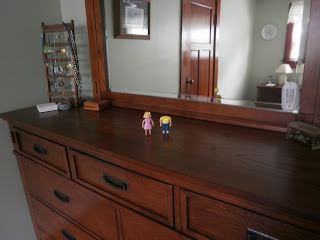 This, however, is not what clued me in to the fact that I'm a victim of affluenza. It was the process of transferring stuff from the old dresser to the new one. During that exercise, I discovered that I own 49 pairs of socks. And that doesn't even count my sweat socks, my knee-high hose, or my footies--just the dress socks you wear with trousers. That includes 10 pairs of brown socks, owned by a woman who rarely wears brown because it's really not my color. 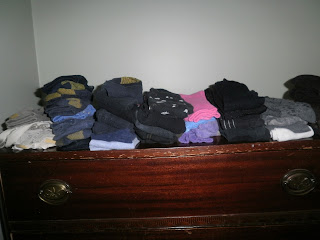 I think an intervention may be in order.

Posted by Jeanne Estridge at 9:20 AM