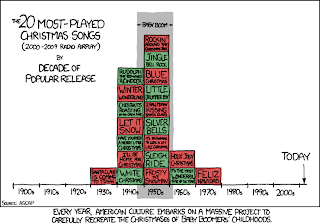 A Facebook friend posted this last week and it made me laugh, but it also made me wonder which Gen X and Y Christmas songs were being ignored.

After some research, I came up with the following list of Christmas songs released since 1970:

So, it appears to me that we listen to the Boomer classics, not because we're recreating our childhood, but because most of the stuff since then kind of sucks.


Posted by Jeanne Estridge at 8:01 PM