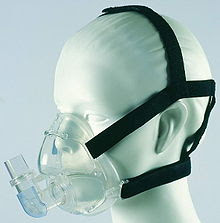 A couple of months ago, Old Dog's snoring reached a volume that left him three options:
1) Get tested for a sleep disorder
2) Sleep in a separate bedroom
3) Risk being suffocated by a spouse driven over the edge by lack of sleep.

The testing revealed sleep apnea, a condition under which a person will stop breathing until lack of oxygen forces them awake. This pattern repeats many times a night, causing the sufferer to skip the most valuable stages of sleep, those that allow the mind and body to renew themselves. Possible side effects of this sleep shortage include weight gain, diabetes, inability to concentrate and propensity to nap when watching NASCAR on TV.

The treatment is something called a CPAP (continuous positive airway pressure) machine, the device pictured above. The face mask fits over the nose and mouth with a tube leading back to a machine that forces continuous air into the lungs, keeping the bronchioles and alveoli expanded, which makes it easier to keep breathing.

The first night Old Dog got the mask, I took one look at him and said, in my best Jeff Goldblum imitation, "Help me! Help me!"

Old Dog flipped me the bird.

He only made it through about two hours in the mask that night. Miserable as it was, though, when he had it on it kept him from snoring, which meant I slept a lot better.

The second night, I intoned, "Luke, I AM your father."

He flipped me off again, but that night he managed to wear it for four hours.

Night number three: "Doctor," I sobbed, "don't pull the plug. I'm not ready to lose him so soon!"

Can people get carpal tunnel from overusing their middle fingers?

But he was back to two hours that night, and the next morning, he grumbled about having to wear the mask.

"I can't tell that it's making any difference," he said.

But as soon as he removed the mask, he was snoring again, in that stop-start, no-breath-at-all-for-an-agonizingly-long-time way that makes it hard for me to sleep.

How to keep him motivated to wear the mask?