The Pig in the Python 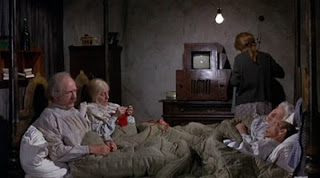 Last Sunday, our minister (who's in his early 50's) stated that we Baby Boomers are the most selfish generation to ever grace this planet.

As a card-carrying Boomer myself, I wondered: is this a general perception? So, I Googled "boomer selfish"...

...and found a post by a Samuel J. Scott, a Gen-Y member. His gripe: we're working too long, hogging all the good jobs, so that his generation has to stay in school running up student loans or live in their parents' basements.

Then I found a post by Debbie Schlussel that says we're as selfish in near-death as we were in life. Her beef? That many of us plan to spend all of our wealth before we die, rather than passing it on to our kids.

And then, on a site called Die, Boomer, Die (I've realized at this point that we're about as popular as Stephen Colbert at an RNC meeting) I read complaints that we're retiring too early, eating up all the Social Security and Medicare money.

By now I'm starting to feel like the grandparents in Willie Wonka, the ones who'd been bedridden for twenty years while Charlie and his mom slaved to feed them (not to mention changing out four bedpans, which must have been truly disgusting.) And on top of that, it turned out Grandpa Joe was sandbagging the whole time, because as soon as the golden ticket showed up he started leaping around like a grasshopper on a griddle.

I'm not denying that we're selfish. The ability of my generation to ignore facts, reinterpret history and even reconfigure reality to justify doing whatever we want is more mind-blowing than the drugs we experimented with in the 60's.

But, folks, we only have three options:
1) Work longer (retaining all the good jobs)
2) Retire early (sopping up all the Social Security and Medicare money) or
3) Use our savings to fund our retirements (leaving nothing for our kids).

Okay, I guess there is a fourth one, scheduled suicide, but I'm not willing to entertain that, even if it would make me popular among the younger set.

If you wanna be pissed, though, be pissed at medical research, which has extended the average length of retirement from 18 months (back when Social Security was first put in place) to 20 years (as of 2007). It's only when you take the massive size of my generation and multiply it by how long we live in retirement that the problem reaches truly epic proportions.

Next week: some options for addressing this issue.
Posted by Jeanne Estridge at 5:37 AM