The Pig in the Python, Part 2: Do-It Yourself Death Panel 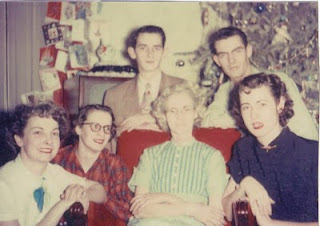 My Grandmother Robertson was widowed when she was in her forties, left with five children. She relocated from eastern Kentucky to Dayton, Ohio, where she opened a boarding house, cooking and cleaning for half a dozen strangers so she could feed and shelter her kids.

She was a skinny little woman, fiercely independent, who was still climbing up and down ladders painting ceilings (and doing her own housework, and cooking, and cleaning, and gardening) into her eighties. But when she was eighty-three a series of temporary ischemic attacks, small strokes known as TIA's, shorted out enough of her wiring that she was forced to move to a nursing home.

Over the next few years, recurring TIA's robbed her of her ability to read, to speak and eventually even to recognize anyone.

One night when she was in her early nineties, her heart stopped. By chance an aide found her almost immediately, and resuscitated her. My aunt called me the next day.

"Thank goodness that aide came by," she said, in the tone of one reporting a miracle, "or we would have lost Mom."

But, for me, my feisty grandma had ceased to exist long before.

By the time this brush with death occurred, she spent her days tied into a wheelchair, wearing diapers and eating pre-mushed food because she couldn't remember to chew. She cradled a plastic doll she believed was my Aunt Lorena, the infant she'd lost to whooping cough.

Grandma lived five more years after that, and if she'd been capable of lucid thought, I'm convinced she would have been disgusted that her escape had been foiled.

So what does this have to do with the pig in the python?

Our society is unprepared to deal with the mass of Baby Boomers who will require long-term care. And, although we can't avoid growing old, we can take steps to limit how long we linger, drooling and building up bedsores even as we soak up every available dime from American taxpayers.

After watching what happened with my grandmother, I am determined to avoid sharing her fate. And I'm not asking my daughter to make this decision, because, after seeing my aunt's reaction, I know it's not a fair thing to ask.

Instead, Old Dog and I have set up Living Wills that specify that, in the event something bad happens, no extraordinary means will be taken to keep us alive.

Because I, for one, am not waiting for the Death Panels.
Posted by Jeanne Estridge at 5:00 AM