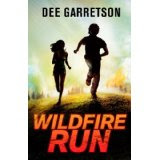 A few years back, at a writing conference in Columbus, I met a woman from Cincinnati named Dee Garretson. We were both working on romance novels and eager to learn more about the craft, and to hang out with other writers. (Who could understand our obsession.)

Unlike many novice writers, we continued to write, working on our books, honing our craft and getting nowhere, publishing-wise.

Then, a couple of summers ago, Dee dashed off a middle-grades novel, gearing it toward her 5th grade son. The novel centered around the son of the President (who happened to be the same age as Dee's son) and a couple of his friends and what would happen if these youngsters got caught inside the Camp David compound in the middle of a forest fire after all the adults had been evacuated.

I read an early draft and loved it. She soon found an agent who felt the same way.

It hit the bookstores on August 31st, and if you know a kid in this age range, I heartily recommend it.

I plan to buy several.
Posted by Jeanne Estridge at 6:46 AM