My Little Town Tuesday: Why, Lord, why?

This may come as a surprise, but I live just up the road from the 65-foot statue of Jesus that made national news when it was struck by lightning on Monday night. 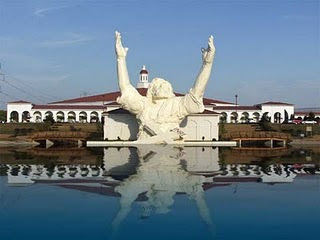 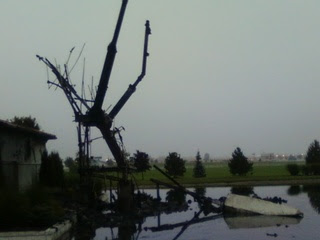 It's impossible to know what was in the mind of God when this happened, and hard not to wonder why He struck this statue of His Son instead of the Hustler store that lay just across the highway.

Was it because there is something deeply wrong inside the Solid Rock Church, as one congregation member stated when interviewed on local television?

Was it because God already warned us not to build graven images?

Or maybe God, like me, just found the statue to be offensively ugly, like one of those statues you find at county fairs that are carved out of butter, as Heywood Brown said.


Perhaps the statue was gay. That's always a valid cause for geographically specific natural disasters.

Or maybe, just maybe, it was because the metal framework has lightning rods for arms.
Posted by Jeanne Estridge at 7:00 AM