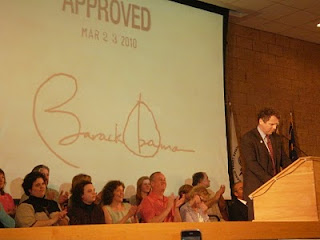 Thursday night I attended a rally in Columbus to celebrate the passage of the healthcare overhaul bill. Spirits were running high, but beneath all the exaltation there was an undercurrent of worry that the Orangemen* will succeed at either repealing or overturning the bill.

I spoke with Senator Sherrod Brown, who openly admitted that the bill is flawed. "We had to make a lot of compromises to get it passed."

Back at home, I read all the letters to the editor in the newspaper vilifying Congress for enacting this legislation.

Then I saw where the national debt is projected to hit 101% of GDP by this fall.

Maybe we should start over.

If we do, I think we should create legislation that's more in keeping with what we can afford, more in line with the wishes of the American people, and more supportive of Amercian business.

Here is my proposal:

1) No one gets their healthcare insurance through their job anymore. The government can't afford to pay for healthcare and employers would certainly be more profitable without that burden.

2) Everyone buys health insurance directly from an insurance company, just like we do car insurance. That way, the free market truly will operate to force competition and efficiencies.

3) No one has to buy insurance. If they choose to spend their money on a new car or a nicer house, that's their choice. One of the most cherished American freedoms is choice, and the government should stop scheming to erode that freedom.

4) Just as with car insurance, when people become a bad risk, their company will raise their rates or drop them altogether.

So now that we've got the ground-rules laid out, let's take a look at what happens when people get sick.

1) If someone shows up at a hospital, either because they're sick or due to an accident, and can't prove that they will be able to pay their bill, we Let Them Die.

2) If someone is born with or acquires a condition that puts healthcare beyond their means, we Let Them Die.

3) When people get old and taking care of them becomes prohibitively expensive, we Let Them Die. (This one actually provides a secondary advantage of trimming the Social Security budget.)

4) Children whose parents can't afford to provide insurance are out of luck. Because, let's face it, kids who grow up like that are probably going to wind up being a life-long burden on the system. Let Them Die.

Healthcare LTD: With the current contents of our wallets, and our hearts, it's what we can afford.

*Followers of John Boehner.
Posted by Jeanne Estridge at 5:00 AM