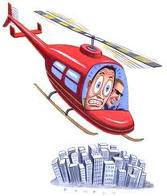 This one made me cackle. Loudly.

One year Esther and Morris went to the fair, and Morris said, "Esther, I'm 85 years old. If I don't ride that helicopter, I might never get another chance."

The pilot overheard the couple and said, "Folks I'll make you a deal. I'll take the both of you for a ride. If you can stay quiet for the entire ride and not say a word I won't charge you! But if you say one word, it's 50 dollars."

Morris and Esther agreed and up they went. The pilot did all kinds of fancy maneuvers, but not a word was heard. He did his daredevil tricks over and over again, but still not a word.

When they landed, the pilot turned to Morris and said, "By golly, I did everything I could to get you to yell out, but you didn't. I'm impressed!"

"Well, to tell you the truth, I almost said something when Esther fell out, but you know -- 50 dollars is 50 dollars."
Posted by Jeanne Estridge at 5:00 AM