A Raisin Christmas: He Ain't Heavy 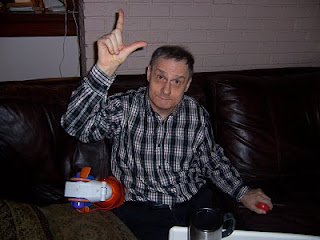 I'd intended to do my normal Fiction Friday post, but the batteries in my mouse died and I used all the AA's loading up a Pegasus, a pelican, a laughing Ernie and a pair of race cars yesterday, so the copying and pasting required for Fiction Friday is out of the question.

Instead, I'm going to talk about my brother, Lynnie.

My parents waited 10 years for a son. They had 4 daughters, but Dad longed for a boy he could take fishing and teach to play ball. Finally, in September, 1955, William Lynn was born. But their joy turned to grief over the next few months as they realized the son they'd longed for suffered from the double whammy of Cerebral Palsy and severe mental retardation. Not nearly as much was known about CP then, and they spent the next few years, and God knows how much money, seeking a cure.

Today, although Lynnie inhabits the body of a 54-year-old man, he has the IQ of an 18-month-old child.

He lives in the Stillwater Center, a facility on the north side of town. After my father passed away a few years back, my 4 sisters and my brother and I, after farming him around from house to house for a few months, made the hard decision to place Lynnie at Stillwater, where the trained staff would know how to handle the increasing number of physical issues he faces.

Having to institutionalize him, after successfully keeping him home for so many years, left us all sick with guilt.

Our worries came to nothing, because from the moment Lynnie moved into Stillwater, he loved it. He's very extroverted, and being in a place where people are paid to cater to him is his idea of heaven. We bring him home for day-long, and occasionally overnight visits, and we we take him back, he cheers when we reach the parking lot.

It was interesting yesterday, watching my grandkids interact with him. A couple of the youngest, Lily and Danielle, are pretty timid to begin with, so it was amazing to me that both of them seemed almost instantly to realize they had nothing to fear from this big, strange man.

Now if I could just get him to share his toys....
Posted by Jeanne Estridge at 11:20 AM