Today would have been my dad’s 95th birthday, so it seems like a good opportunity to tell the story of how my parents met.

If you read War Stories the other day, you know that Dad served in Afghanistan and Burma during WWII. In early 1943, following his medical discharge, he returned to Dayton, Ohio, where his folks were living. By shucking the back brace he was supposed to wear, he reclaimed his job as second-shift supervisor at United Aircraft.

I once saw a copy of the UA newsletter welcoming him back. It contained a picture of him, looking impossibly young, his skinny butt parked on an Army-surplus desk, wearing the cockiest grin you’ve ever seen. Every able-bodied male between the ages of 18 and 40 was overseas at the time, and here he was, a 30-year-old war hero. The women were lined up for blocks.

Into this male fantasy stepped my mom. Her family had just relocated to Dayton from Kentucky following the death of my grandfather. Grandma ran a boarding house while Mom and my Aunt Dortha worked as waitresses at the Green Mill Restaurant. Aunt Dortha has great memories of working there together, flirting with the customers and earning their first wages, but there were three younger kids at home, so when a factory job that paid better came along, Mom took it.

She was 22 years old then, and she once told me, “I thought I was the cutest thing in shoe leather.” Selective about whom she dated, she quickly acquired a reputation for being stuck on herself.

No way could Dad resist that challenge.

One afternoon at the start of her shift, as she was walking through the factory to her press, he stepped out in front of her, forcing her to a stop.

“How’d you like to go out with me on Friday?” he said. Before she could refuse, he snapped his fingers. “Oh, wait. I’m busy on Friday.” And as everyone hollered with laughter and Mom’s face flamed, he sauntered away.

The next day, he repeated the trick. “How about a movie on Saturday? Oh, that’s right, I already have a date.” Even more people had gathered to watch Miss High-and-Mighty get her come-uppance, so the roars of laughter were even louder.

The third time he tried it, though, she was ready for him. As soon as he said, “How about having dinner with me?” she instantly said, “Yes.”

One hour into that date, they got into a fight and she made him take her home.

That was in mid-April, and they repeated that pattern – go out, fight like wildcats, take her home early, until they married, six weeks later. 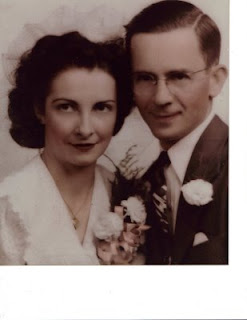 A choice bit of wisdom she passed on to us from her first year of marriage was, “No matter how mad you are, don’t throw spaghetti at your husband. It’s too hard to clean off the wall.”

They remained married – fighting and loving – for over 30 years, until Mom passed away. Although my dad was a widower for nearly as long as he was a husband, he never remarried because, he said, there was no one else like my mom.

I think that knife cut both ways.
Posted by Jeanne Estridge at 5:00 AM