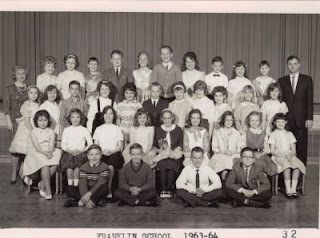 A couple of memorable things happened when I was in the fourth grade. One of them you already know about, the other, I'm pretty sure not.

On November 22, 1963, John Fitzgerald Kennedy, 35th President of the United States, was assassinated. It is one of the three events in U.S. history that people peg to their own whereabouts and activities: Pearl Harbor (before my time, and, I'm pretty sure, before most of yours) and September 11th are the other two.

Mrs. Ernst announced the shooting to our class in the early afternoon and we all bowed our heads to pray for the President. Later, the Principal came by to give us an update and girls wept at the news.

In my sister, Rita's, fifth grade class there was a Czechoslavakian immigrant name Hilda. Rita's classmates swore that when the news was announced, Hilda laughed with glee. In the frigid depths of the Cold War, when everyone knew the Iron Curtain countries hated us for our freedom, it was just the reaction we expected. No one liked Hilda, or played with her, anyway. Her English sounded funny, a sure indicator she was a Communist.

I got my first pair of glasses that evening.

The optometrist's office was housed in an old Victorian in a part of town made nearly inaccessible by Urban Renewal. A federal grant had laid seige to the neighborhood, razing houses and closing down entire streets. Cold rain chased down the windows of the Buick and blurred fog devils rose from the tree-lawns as we wound our way there, with Dad cussing every time he hit a dead-end.

In the office lobby, non-stop coverage of the assassination played on the black and white Zenith as my parents talked soberly with the eye doctor about the tragedy. We weren't Catholic, but we were staunch Democrats, and as enthralled by JFK's charisma as Democrats today are by Mr. Obama's.

On the way back out to the car, I lifted my feet coltishly, trying to step up onto the plane described by my new glasses. My nose and ears were already smarting from the unaccustomed weight, but for the first time in months I could see Dad's headlights reflecting back from the rain-slicked streets as we made our way home.

Tomorrow: The lighter side of Fourth Grade
Posted by Jeanne Estridge at 5:00 AM