Come On a' My House 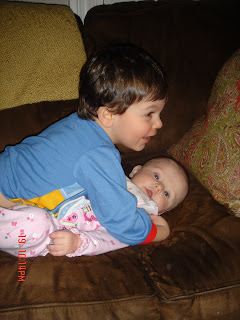 Our downstairs bath is a multi-purpose room. In addition to the normal fixtures one associates with a bathroom, it also hosts our washer and dryer.

And, it’s an indoor swimming facility.

The previous owner installed a hot tub. Before you go all emerald with envy, let me describe this thing. Molded from greenish-yellowish-grayish fiberglass, and riddled with hairline cracks from age, it could easily accommodate four Sumo wrestlers. It takes, without exaggeration, an hour to fill. And that’s just to cover the jets.

My grandkids LOVE this tub. One of their favorite things is to bring over their suits and “swim.” We have lots of bath toys and fluffy towels, and, thank God, a ceramic floor.

Most of the grandkids are, biologically speaking, Old Dog’s. Of the current census of 11 (which fluctuates due to marriages and divorces) only one (shown above with his baby sister*) carries my genetic material. I don’t love him more than the others, but I do enjoy scanning his little face for traces of myself. Because his father is an anonymous donor and his maternal grandfather passed away a couple of years ago, I am the only biological grandparent in his life (although he has scads of non-biological grandparents who adore him).

(BTW – there’s a huge advantage to having a grandchild via an anonymous donor – you can claim all the positive traits and ascribe any you don’t like to his unknown father. “He’s so smart – he gets that from me” and “That temper tantrum thing – that must run in the donor’s family.”)

I picked him up on Friday and we spent the day together, eating lunch as the “pool” filled. I donned my suit and got him into his swimmy diaper. He wasn’t sure about swimming indoors, but once I hauled out the singing dolphins and Pooh and Eyeore and their boats, he was happy to paddle in the warm water, while Grandma showed him how to squeeze Pooh so that water sprayed from his mouth.

The first time I did this, Pooh also spat some bits of leaves and debris that had been resting in his tummy since we put the wading pool away last summer. So a few moments later when I noticed the water was cloudy, I figured that was the cause.

As Phinn continued to play, without a care in the world, however, the water went from cloudy to out-and-out murky. Then I looked at Phinn’s cherubic little face and remembered his nanny telling me that he’d probably poop in the next couple of hours.

Have you ever seen the movie Silkwood? Or watched the part of Monsters, Inc. where Phlegm is decontaminated after he gets that kiddie sock stuck to his back? If so, you have an idea what the next half hour looked like at our house as I disinfected him, me, the tub, the toys, the floor and a load of bath towels.

Kind of takes all the sexy right out of hot tubs, doesn’t it?

(*Although they have different mothers, the kids share a donor, so they’re biologically related.)
Posted by Jeanne Estridge at 5:00 AM