It was Tom and Tim who showed me that I wasn’t cut out to be a motivational speaker.

Poindexter (not his real name), our Systems Analyst, had an odd gait; rolling onto the ball of his leading foot with each step, so that his body bobbed up and down like a merry-go-round pony when he walked. His glasses looked like they'd been ground from the bottom of a pair of highball glasses, and behind them his eyes were always in motion, not just roaming, but flickering. His eyesight was so poor that he practically had to be on top of things to see them.

Our boss thought Poindexter was brilliant, but among the staff he was less popular. He had a reputation for being a little too touchy with the department females, which we, at least in part, excused because of his bad vision, but Tim and Tom flat-out hated him. To his face they were barely courteous. Behind his back they made endless mockery – of his walk, of his eyesight, of his habit of trailing his finger along his computer screen and leaving marks that they insisted were nose-prints.

I wasn’t wild about Poindexter, either – he once lifted a necklace I was wearing right off my chest, all but burying his face in my bosom to look at the pendant --but one day he told me a story that made me view him differently. We were talking about our eyesight – mine was poor, too – and he said his was caused by something that happened before he was born. His mother had tried to have him aborted.

I was in my twenties, sappy enough to fall for a hard luck yarn and naive enough to think that a sad story could change people’s hearts and minds. So I related the tale to Tom and Tim, figuring that compassion would make them ease up on the poor guy.

And it actually seemed to work. Over the next couple of weeks, they stopped giving him grief. I felt pretty good about my powers of persuasion, right up until I walked into Tom’s cube and saw a cartoon that looked a lot like this hanging on his wall: 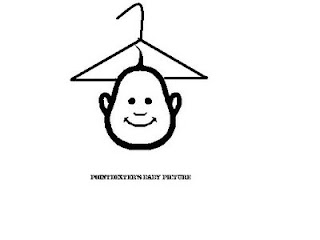 Zig Ziglar, I think your job is safe….
Posted by Jeanne Estridge at 5:00 AM