Curiosity killed the cat, and it's not doing me any favors, either.

Last week, as I was doing a little blog-cruising, I came across a post over at Fingers and Paws where CDB mentioned, as a throw-away line in a tag list, that she'd once been on the Ricki Lake Show and had pictures. Via the comments, people asked to hear the story. She seemed a little reluctant, so to sweeten the deal I offered to post the pictures from my 41st birthday party if she'd tell the Ricki Lake story and provide photographic evidence.

In the spirit of "never let it be said that I'm a welsher" (or have a lick of sense about when to keep things to myself) I am, forthwith, posting said party pix. These were taken during my Bone Chute days, before I settled down with Old Dog and became grandmother to southwest and central Ohio. 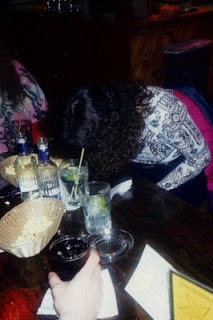 Here I am at a cowboy bar, picking up one of the 13 drinks all the nice folks from work bought me for my birthday.


And here I am, a short time later, riding the bull: 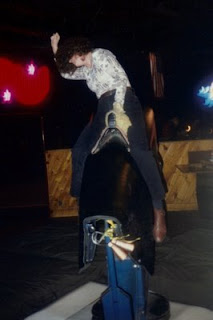 2) I did not have a hangover the next day (God knows why -- I drank whatever people put in front of me, including something called a "Purple Nightmare." I should have needed a stomach pump.)

3) When I went shopping the next day with a girlfriend, I complained about my arm being sore. It took both of us a couple of hours to make the connection back to the bull-riding.

4) The hair. When I moved Up North, I had waist-length, permed hair. I returned home over Christmas and scheduled an appointment with the girl who had done my original perm, because I knew she was skilled with long hair. When I got to the shop, she had quit, but the remaining girl said she had my card and would be able to replicate the results. She burned my hair so badly I had to chop it off and live through two years of letting it grow out. That was my last perm. Ever. 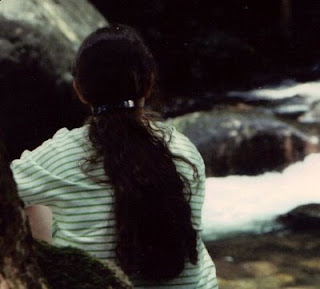 Posted by Jeanne Estridge at 2:45 AM