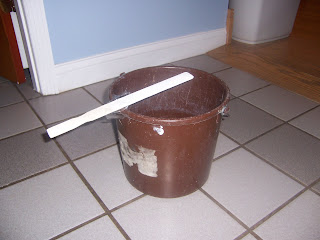 (The ladies at the clinic aren’t thrilled, but they admit it wasn’t cool to have a rodent running all over the clinic, leaving tiny brown gifts everywhere.)

So, you’re wondering, how did I know that if you give a mouse a swimming pool with a gang plank attached, he would turn it into an opportunity to meet his maker? Ah, thereby hangs a tale….

I learned this on my first IT job, at a local college, from a guy we’ll call Stan.

Stan was really smart, but I’m not sure how much of the real world he ever heard over the sound of his own drummer. He spent his free time constructing windmills powered by the office ventilation system and sundials that were latitude-adjusted to accurately tell the time on sunny days. On Fridays he would bring in a metal detector and go through the couches in the lobbies, extracting lost change. I believe his lifetime high for one foray was $1.28.

There was also a prankster in the office, we’ll call him Tom. Tom’s practical jokes were both merciless and legendary. He once programmed my phone to automatically forward to the office of the college president. Another time he went out to the parking lot at lunch and moved the car of this guy who was foolish enough to leave his keys lying out, so when it was time to go home the guy freaked out, thinking his car had been stolen. I could go on and on, but you get the picture.

Anyway, at some point we noticed that, despite all his tomfoolery, he never played jokes on Stan. One day I asked him why.

“You remember when the Oakwood library had that contest," he said, "to see who could translate the Egyptian hieroglyphics over their entranceway?”

“Sure.” Of course I did – Stan had won that contest.

“Well, Stan figured out the correct translation from this book he had.”

“Well, a few weeks later I saw he had a book on plutonium bombs.”

*
Anyway, one day we discovered a mouse in the computer room. Maintenance set traps, but they came up empty. (Literally – the bait was gone, but the mouse got away.) After a couple of weeks of this, Stan brought in a bucket and taped a wooden ruler to the rim, just like the picture above.

This must have been prior to the hieroglyphics contest, because I remember we all razzed him about it.

Until the next morning, when he quietly disposed of the drowned mouse.

(Which, by the way, is just a gross way to start your day. I don't recommend it. The toilets at the clinic have frequent issues, so I didn't want to give him the goldfish treatment. Turns out I'm not any crazier about dead mice than I am live ones, so I'm standing there shuddering, teeth clenched to keep from screaming, as I use the paint stirrer to keep him from plopping into the john. Ugh.)
Posted by Jeanne Estridge at 7:56 AM