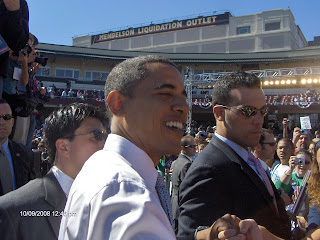 Is America the best country in the world, or what?

I’m feeling like it is, because today I got to shake hands with Barack Obama.

As he walked the rope line, trying his best to shake every hand thrust toward him and to make eye contact with each and every person and make them feel that his dazzling smile is intended solely for them, I got a sense of the true meaning of the word “charisma.”

And this is why I support him. Because I think that, over the next 4-8 years America is going to have to do some pretty tough stuff. Our economy is in shambles, our troops are worn to the bone, and we still have our oil addiction to kick. And I think that Obama, who has overcome some really high hurdles to get to where he’s gotten, has the unique ability to inspire people to go beyond their own self interests and do more than they’d care to do, for the good of everyone.

Let’s talk, instead, about the quest I had to complete to earn this opportunity.

I Become a Redneck

My first attempt to see Senator Obama occurred in August, when he spoke at Stivers High School. Stivers is the oldest school in Dayton, built in 1908, and I figured the auditorium would be small and I’d be able to see him without resorting to binoculars. Even better, tickets were free. All you had to do was to go down to the Democratic Headquarters and pick them up.

I talked my libertarian boss into letting me leave work at 2:30 so I could find parking and get in line early, but by the time I arrived the line was already stretching halfway around the block. It occurred to me that the small auditorium size was maybe not going to work out so well.

The line was friendly, festive even, with folks coming by every few minutes to hand out water (I did mention it was August, didn’t I?), proffer petitions, and register people to vote. (Which I found surprising, figuring anyone who cared enough to stand in line on the off chance of getting tickets to miss work to see The Man would already be registered, but they signed up quite a few people.) Everyone in line talked easily, united by a common goal, while the sun blazed down on us.

At 6 they came out to tell us that they were down to their last 75 tickets, and anyone more than 20 feet back in line wasn’t likely to get in.

So, all I got out of that effort was a sunburn and the chance to tell people that Barack Obama turned me into a redneck.

I Become a Volunteer

Except for my abortive attempt to attend a rally, I was pretty content to sit on the sidelines of the campaign this year, just as I’ve done in years past.

And then McCain selected Sarah Palin as his running mate.

Pundits say that Ms. Palin galvanized the Republican base. On me, she had the effect of drinking a Fleet cocktail with a milk of magnesia chaser. Something in my gut began prompting me to get up and do something. The idea of having That Woman one heartbeat away from becoming George Bush III was scarier than having people who raise beagles move in next door. I logged onto the Obama website and signed up to do a Neighbors Talking to Neighbors canvass.

I spent the next few evenings ringing doorbells in my neighborhood, talking to folks about Senator Obama and duly reporting back the information at
http://www.mybarackobama.com/. A couple of weeks later, I got a phone call, asking me to attend a day-long training and become an active member of the campaign. Figuring there was no point in sloshing around in shallow end when you can dive in over your head and drown, I did.

Over the next couple of weekends, I knocked on 102 doors, out of which I actually spoke to 25 potential Obama supporters (and a number of people who very much weren’t). It’s not as much fun as, say, a weekend camping in the rain, but it was good work.

And goodness is sometimes rewarded. On Monday night I was invited to a conference call, where we were told that Barack would be in Dayton on Thursday, at 5/3 Field, and that they had 25 VIP tickets to hand out. Each person who knocked on 50 doors Tuesday or Wednesday could earn a ticket.

I Earn my Ticket

On Tuesday afternoon I went to the Obama Headquarters at the IBEW building and picked up 2 packets, figuring I’d score a ticket for myself, and one for my husband, who’s too shy to talk to people, but who walks with me to keep me safe.

The packets were a good news/bad news proposition.

The good news was, they were in a nearby neighborhood, less than a mile away.

The bad news was, it’s a really rough neighborhood.

But, with Bill walking shotgun, we set out. This is how it went:

I got bitten by a dog.
I saw a guy’s butt crack.
I got jeered at by a bunch of Palin-ites.
I was nearly accosted by an angry McCain supporter, who backed off when he realized I wasn’t stopping at his house (and, presumably, saw Bill).

And that was just the first night. The second was about as bad. As we get closer to the election, and it starts to look more and more like Obama may win, McCain supporters seem to be growing more tense.

And what I want to remind them of is this: if you don’t like who gets elected, just wait 4 years and vote for someone else. Because in America, we don’t have to overthrow the government, or stage a civil war, or have a military junta, to change our government, because every 4 years, regular as clockwork, the current administration retires and a new group takes over.

And that is what makes America the best country in the world.
Posted by Jeanne Estridge at 7:30 PM