Chronicles of a Rescue Dog, Part 10: We Interrupt this Honeymoon to Bring You a Dose of Reality

Last week I talked about all the great things Kai learned at boarding school, things that seemed to stick even after we brought him home.

This week we're going to talk about a tough reality underlying that rosy picture.

On Wednesday, I took Kai to the gym with me to walk in the cleared, lighted parking lot. (We don't have a lot of sidewalks in our neighborhood, so it's not ideal for walking, especially before daylight.) The perimeter of the parking lot at the gym is 1/5th of a mile. We walked fifteen laps. It didn't tire him as much as it did me, but it did take his edge off.

I'd call that a win.

The next morning we repeated that process, with a slight difference. On Thursdays I have a yoga class from 7:30 to 8:30, so we did our three miles and then I put him back in the car to hang out while I went to class. My yoga instructor pulled into the lot just as I was getting him squared away. She asked how things were going and I bragged him up.

"Sure," I said. He'd met her once before and seemed to like her, licking her hand gently.

This time, we repeated the same routine as last time. I opened the car door. She extended her hand. He sniffed it. And then, with no warning whatsoever--no bark, no growl--he bit her, nipping her knuckle hard enough to draw blood and tearing her coat sleeve.

To say we were both shocked would be an understatement. She assured me she was okay and went inside to wash the cut. I closed the car door, profoundly disturbed.

When I got home after class, I texted K9 Guy to say Kai had bitten someone that morning and did he have time to offer his insight? He called me right back, as shocked as I was.

But after I described what happened he said it wasn't that surprising. Kai was in his safe space (the car) and I let a stranger into his space.

He said Kai is not a dog who is ever going to want strangers to pet him. He said as far as Kai is concerned, a universe with just two people in it (Old Dog and me) would be sufficient. He said that when I have Kai out and about, it's my job to make sure people don't touch him, and that after four or five months of that he'll relax and be a little less tense, but he's never going to tolerate being petted by strangers. 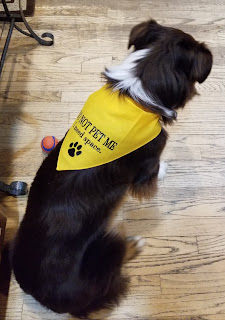 In most other areas, he's still doing very well. He still comes when he's called. He rarely tries to establish dominance over me. He's only barked and lunged at one passing stranger when we're out walking (I stopped to talk to her instead of moving briskly on past.)

To the ridiculous amount of stuff I've bought Kai since we got him, I'll be adding a basket muzzle that will allow him to sniff and drink, but not bite.

We've fenced off part of the back yard so that he no longer has access to the part of the yard where people walk by and where delivery people drop off packages.

We also had our local utility company install a remotely-readable electric meter so no one has a reason to be in that part of the yard. (In fact, it's only accessible via the house.)

We've done everything I can think of to safeguard him from people and people from him.

And that's the best I can do.

Sorry this isn't an uplift ending. When I started this series of posts, I thought it would be a cute Marley & Me story. Hoping that in the coming months, I'll have more optimistic results to report.

Thanks for listening!
Posted by Jeanne Estridge at 6:53 AM