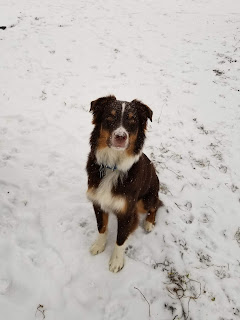 If you've read my last couple of posts, then you know about Kai, the Australian Shepherd that Old Dog and I adopted via a rescue organization. We brought him home the day after Thanksgiving.

Kai had a lot of behavioral issues from the very beginning. Most of them weren't directed at Old Dog or me, but manifested when Kai encountered other people or animals. Because he found these interactions so stressful, I contacted the vet and got a supply of Trazadone, aka doggy downers, to help him manage his anxiety.

On Christmas Eve, when Old Dog's kids and their kids traditionally get together with us to celebrate Christmas, I gave him the first round. Even with the drugs in his system, Kai had to be kept on a leash most of the day--which created its own issues, since he's very protective of me and didn't want anyone near me.

On New Year's Eve, for my annual sleepover event with all the grandkids, I tried administering more drugs, and sooner. That seemed to help some. I also left him off the leash. He wasn't overtly aggressive with anyone, just displayed typical herding behavior common in Aussies. I've spent the past eight New Year's Eves yelling, "No running!" all evening. This year, it was like I had a furry 50-pound bouncer enforcing that rule.

My own personal worst week with him was Week 2, when he began mounting me to assert his dominance whenever I didn't do what he wanted--which usually meant I wasn't taking him outside to play ball 500 times a day. I finished the week riddled with bruises down my back, ribs and legs. After I watched a couple of YouTube videos on how to manage that behavior though, (just tell him, in a firm, calm voice, to sit) it quickly tapered off.

Through all of this, I kept my hopes pinned the obedience class that started after New Years. If I could get him through the basics, I could take him on through agility classes and/or scent training. He's very bright, so either of those would give him the "job" that I understand is critical for keeping Aussies engaged and out of trouble.

On January 3rd, we went to our first obedience class. In preparation, I gave him 90 mg of Trazodone three hours ahead of time and then walked him for a half hour. Despite my precautions, as soon as we got out of the car and he saw the other dogs, he started barking and yelping and lunging.

The instructors funneled us off to a separate room to see if he could calm down. He did, somewhat, but when one of the instructors came in to talk to us, he lunged at her face. She said she felt a tooth graze her cheek. She left the room, very shaken. A few minutes later, the other instructor came in an coached me through calming him again, using the sit command and frequent treats. He seemed to be fine until, out of nowhere, he lunged at her, too. She said they'd refund my training fee and recommended private training. She said their greatest concern was his unpredictability--that he seemed okay one second and would attack a second later.

Private training is expensive--the local trainer I've found charges $1500. It's just not in our budget, particularly since there's no guarantee it would help. Correcting his behavior is beyond my skills. I was really counting on those obedience classes.

So, I contacted the rescue organization about returning him. They asked me to meet with a trainer so they could evaluate whether he can be placed with another family.

Next week: Part 4: What the Trainer Said


Posted by Jeanne Estridge at 9:36 AM